By Victoria Ibezim Ohaeri
I like to describe myself as a very daring woman. From the Loango oil fields in Pointe Noire, Congo Brazzaville where communities are ravaged by oil pollution, to the indigenous communities living on the edge of the mountains in Lima, Peru threatened with forced eviction, down to Kibera Slums in Nairobi, famed for its very deplorable housing conditions, i am no stranger to inquisitive local and international research exploits aimed at uncovering injustices affecting inaccessible and marginalized communities across the world. But going to Maiduguri, and other northern states in the thick of the insecurity crisis in northern Nigeria is among my many adventurous assignments I consider quite daring.
Again, I find it even much more daring to summon courage to pen my story, after a relatively long period of savoring a tight-lipped posture. Formal research reports have a way of silencing the human struggles, pains and fears of researchers on the field – in dangerous locations – looking for hard data and compelling proof that  broadcasted atrocities indeed occurred. These untold struggles are however,  no less real, deserving of spaces to tell the real stories behind the stories.
With mixed feelings and echoes of the many“don’t go” warning bells ringing aloud in my ears, I headed to Lagos airport to catch a flight to Abuja en route Gombe. All my traveling partners had cancelled their participation in the field visit just days to the planned trip. I felt so lonely, but somehow, I was comforted by a still voice reminding me that Ilemona, a lawyer, and comrade would join me at Abuja airport as agreed. I hoped. And believed.
Getting to Abuja was quick. No flight delays. My eyes scanned the airport hoping to catch a glimpse of Ilemona, until my search was interrupted by a relentless call. It was Ilemona! He called to cancel his travel plans. His wife had a bad dream the previous night, and prevailed on him not to travel. Who would not heed such a wifely counsel? It sounded like a bombshell!  Still lost in thought, contemplating what to do next, the boarding of the Arik Air flight to Gombe was announced. Dejectedly, I strolled to the tarmac, hearing many voices of caution, especially the frequent “don’t go” warning bells.
Aboard the aircraft, almost everyone had a copy of popular and unpopular national newspapers with screaming headlines, editorials, stories and photos of the carnage in the north, especially in Maiduguri. I began to take hurried notes of salient issues, statistics, locations and details of the flashpoints. There were just too many things to take note of. Too many explosions. Too many deaths. Too many wounded. Too many displaced people. Suddenly, the intensity of the sad news, gory pictures, and unrelenting sighs from other passengers as they flipped through the pages, welled up my appetite to visit those locations and personally verify all that information. I was hungry to put a face to those stories.
I was boarding a taxi at the Gombe airport when someone quietly tapped my shoulder. It was my seat neighbor in the aircraft, named, Hadiza. She politely invited me to join her organization’s staff bus that had come to pick her and her colleagues. I was wondering whether to say yes or no, when an air-conditioned bus – with an inscription indicating it belonged to one of the northern states – pulled in front of me. I joined. There were eight of us. While the occupants of the bus discussed in Hausa and laughed boisterously, I remained quiet, imagining what an improvised explosive device really looked like.
“Yarinya, where are you going…? I want to know the right place to drop you… We are going to Bauchi?”, the driver of the vehicle asked. That question jolted me out of my thoughts.
“I am going to Maduguri”, I muttered.
Almost uniformly and instantaneously, everyone in the bus turned to look at me, and repeated after me, “Maiduguri”??? “Is your husband there?” ‘Are you a corper posted to Maiduguri?”  ‘Why didn’t you reject your posting?” “Are you a journalist”…Looking very surprised tinged with concern, all of them fired questions one after the other. I was too afraid to disclose my mission. Somehow, I agreed that I was a journalist. They rained curses on my employers for daring to send a woman, unaccompanied, to the warfront. Probably moved with pity, they took me to, and dropped me safely at the Maiduguri park in Gombe town. 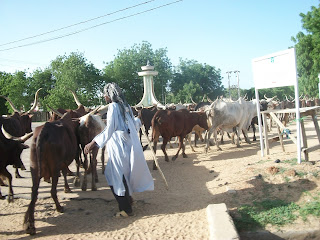 It was at the park that it dawned on me that something was wrong. I didn’t want to travel alone. I hoped to see at least, one passenger headed in the same direction with me. 10 minutes, 20, 30, 40, 50 60 minutes passed; not a single person showed up. At that point, I again, considered turning back. But a stubborn force lurking within, urged me to ignore the noisy distractions, and move on. So, I chattered a cab and began the long journey to Maiduguri. Nearly all the vehicles on the road were returning to Gombe, and the car I was in seemed to be the only car heading towards Maiduguri. There were too many road stops and slowdowns to allow cattle and cows to pass – the only living things I met on the way. Also, there were too many police and military checkpoints. At each checkpoint, I would explain and re-explain my mission to Maiduguri. Probably inspired by the repetitive explanatory lines, my curiosity and eagerness to reach Maiduguri soared.
Five hours later, the sight of numerous heap-stacked checkpoints manned by even more fiery-looking, heavily armed camouflaged soldiers hinted me that I was in Maiduguri. The questions were more vicious, accompanied by rigorous vehicle searches. It seemed like a war zone. The NNPC fuel station and all adjoining facilities stationed at the entrance gate into the city were fully under lock and key. There were very few people on the streets, no taxis, no okadas, no sign of social or economic activity. It then dawned on me that I was in Maiduguri: the town everybody loves to dread. 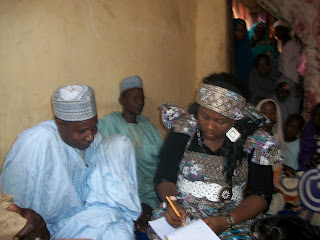 Back To The Future

I wonder if the Maiduguri airport is still under renovation as claimed by President Jonathan.

I hope you saw the residents of Maiduguri or is it now a ghost town?

too many ‘edited’ versions of the truth flying around and Victoria’s trip is a pointer for the need to make haste slowly in lumping everyone in the north together.
May God grant the politicians the grace to mend their ways before it is too late.