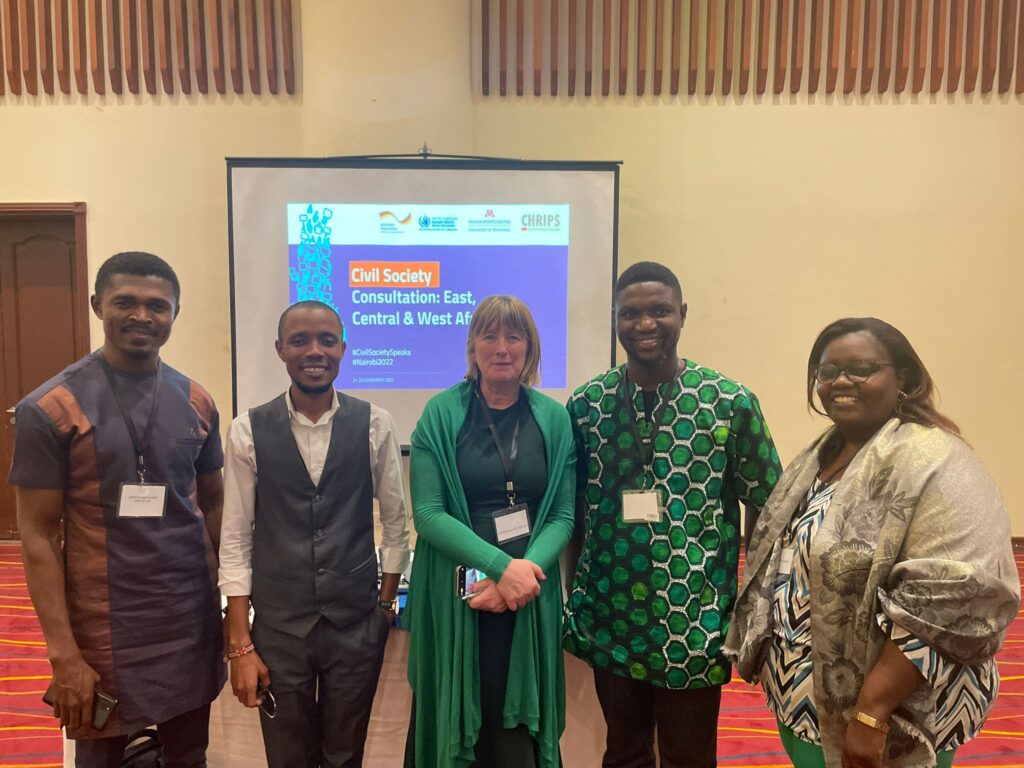 Spaces for Change| S4C participated in the civil society consultation for West, East, and Central Africa held under the auspices of the United Nations Special Rapporteur’s “Global Study on the Impact of Counter-Terrorism Measures on Civil Society and Civic Space.”   S4C’s Legal Officer, Patrick Allam, is among the forty-five leaders and representatives of (45) civil society organizations (CSOs) from twelve (12) countries across three (3) regions in Africa that participated in the two-day consultative meeting held in Nairobi, Kenya, between 21-22 November, 2022. The event was organized by the United Nations Special Rapporteur on the promotion and prevention of human rights while countering terrorism (UN Special Rapporteur) and the Centre for Human Rights and Policy Studies, Kenya.

At the meeting, participants shared diverse accounts of the historical and political events that shaped the counterterrorism (CT) measures adopted by countries in the African continent. For instance, the United Nations Security Council passed Resolution 1373 after the terrorist attack on the World Trade Centre in 2001. That Resolution and other related frameworks laid the foundation for the global war against terror, requiring governments around the world to implement internationally-prescribed CT measures in their various countries. The plethora of measures rolled out by countries in the name of countering terrorism have fallen short of human rights principles, particularly limiting citizens’ right to speak, assemble and express themselves freely.  In East, West and Central Africa, the misuse of CT measures manifests mainly through restrictive counterterrorism legislation, huge budgetary allocations for surveillance infrastructure, administrative sanctions, expansion of policing powers, and the overregulation of civil society organizations.

S4C’s Patrick Allam shared experiences of the Nigerian context regarding the enforcement of CT measures at the national level, chronicling the various interventions by S4C to ensure that the government’s security initiatives align with Nigeria’s human rights obligations. For example, S4C’s sustained advocacy over the years culminated in the repeal of Nigeria’s Money Laundering (Prohibition) Act. A major feature of the repeal is the delisting of non-profit organizations (NPOs) from the designated non-financial institution’s (DNFI’s) list, and removing them from the stringent rules that DNFIs are subject to. In light of the security law upgrades, the report of the National Risk Assessment conducted on NPOs has been released identifying subsets of NPOs at risk of terrorist abuse. Despite many wins, several gaps remain, necessitating further action to strengthen public institutions to increase respect for human rights while implementing CT norms.

Other participants shared experiences about the trends and measures prevalent in their various contexts with specific examples and case studies. They also shared near-uniform accounts of state repression framed around of objective of protecting national security. The imprecise definition of “terrorism” has provided African leaders with an excuse to justify actions that stifle dissent and restrict civil liberties. Rolling out very restrictive security laws appear to be the most common strategy adopted by African governments.  Anti-terrorism laws of most countries are usually framed in overbroad language and expands the policing powers of security agents. In exercising such broad powers, security agents have been found to peddle negative narratives against dissenters, and have also superintended over violent crackdowns on activists, protesters, human rights defenders, and other agitators. Consequently, civil society actors and organizations are worst hit by this growing drift towards authoritarianism.

The diverse experiences shared revealed significant similarities in counter-terrorism legislation, the mode of attacks on human rights defenders,  the surveillance CSO finances, harassment of civic actors, and attacks on press freedoms across West, East and Central Africa.  Participants were encouraged to take these broader trends and findings to design new advocacy strategies to challenge counter-terrorism measures impacting civil society and civic space in their various countries.  The case studies, testimonies, and experiences shared during the consultation over the two days will feed into the global study currently being undertaken by the UN Special Rapporteur, and further presented to the United Nations General Assembly as insurmountable evidence of the downstream harms of the counterterrorism architecture on the civic space.