Coalitions of Solidarity – what works, how and when? 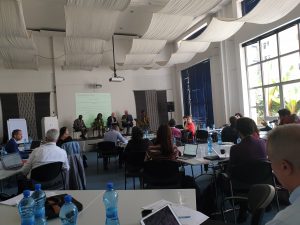 At the panel discussion, the experts shared their organizational experiences in implementing collaborative interventions, elucidating how advocacy coalitions were built, driven and sustained in response to threats to the civic space in their respective countries. S4C’s experience in mobilizing a sectoral response and strategy for engaging external assessors from the Financial Action Task Force and its regional styled body, GIABA, during Nigeria’s second round of Mutual Evaluation in 2019, was among the case studies documented and presented at the forum. Other case studies, documented in the report, Solidarity in Times of Scrutiny,  include civil society response to ActionAid Uganda’s office raids and assets freeze by the Ugandan government; the reputational attacks on Islamic Relief Worldwide and incident management techniques adopted by Green Peace International.

Being on the panel afforded S4C an opportunity to share its FATF-focused civic space advocacy with a global audience. Beginning in 2016, S4C started to monitor and document how counter-terrorism and anti-money laundering (ALM) measures were being used to clamp down on activists, bloggers and civil society groups; accusations were made that activists were threatening national security and that CSOs were conduits for money-laundering or the financing of terrorism. As a result, many activists were arrested. Documentation of these arrests and detentions on a digital database (www.closingspaces.org) revealed that many of the individuals targeted had no connection to money-laundering or terrorism; rather, the measures were being used to cover up the targeting of those who were vocal in their criticism of the government.

Pushing back on this would require more than documentation though; civil society needed to engage directly with the institutions and regulators behind these measures (e.g. the Special Control Unit against Money Laundering and Terrorism Financing (SCUML)), FATF, GIABA and so forth, to point out the implications of their legislation and to push for legal reform. Through this work, like-minded organisations began to collaborate more regularly, and a more formal coalition was formed.  Adopting the name, Action Group on Free Civic Space, Nigerian organizations worked together to co-create a unified sector position and voice to defend civic space during Nigeria’s second round of the FATF-conducted Mutual Evaluation exercise.

Breakout sessions that followed the panel discussions examined three issues in greater depth: The ideal country coalition; Solidarity local and global and Engaging with citizens and our core constituents. By mapping out the strengths and competencies of local and international organizations during the group session on local and global solidarity, it became clear that all actors, whether operating locally or internationally, bring something to the table which coalitions must recognize and benefit from. In order to build an effective coalition, the participating groups will need to forge strong partnerships across thematic lines and across borders, drawing from the complementarity of skills, experiences and efforts. It is also important to make friends in peacetime in order to have friends in times of adversity. Taking this approach allows the specific causes or issues advocated by the coalition to be undertaken in a coordinated way that creates an economy of scale and fosters reciprocal relations.