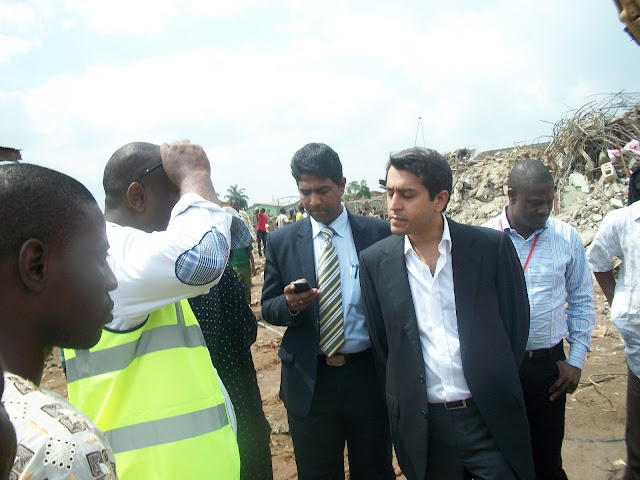 On Friday, June 8, 2012, SPACES FOR CHANGE visited the site of the DANA Airlines plane crash to commiserate with the survivors and displaced families; to provide free legal counseling and advisory support;  document the impact of the crash on their lives and livelihoods and work together with them to develop a legal strategy for demanding compensation and resettlement.

The DANA Airlines aircraft crashed into a block of six flats, 2 rooms boys quarters, and a printing press on June 3, 2012. Survivors comprised mainly of the residents of the apartments crushed by the weight of the aircraft and the ensuing explosion. Lagos State government officials were seen demolishing the remains of the building and possibly, looking  for either more survivors, or bodies under the rubble.

SPACES FOR CHANGE had extensive discussions with survivors and provided them free on-the-spot legal counseling and advisory services. They learned about their rights as displaced persons, especially the rights to receive compensation and resettlement, and the national and international legal regimes that guarantee those rights. We also educated them on the specific obligations of both the government and the DANA Airline towards them, including the obligations to provide them with full information regarding the crash investigations and insurance policies; opportunities for participation in the design and implementation of the benefit schemes; and the right to propose alternatives to any of the arrangements made for them.

SPACES FOR CHANGE’s executive director, Victoria Ohaeri also met with management of DANA Airlines, the Chief Executive Officer of the Lagos State Emergency Management Authority (LASEMA) and officials of the National Emergency Management Authority (NEMA). In particular, S4C met with the following:
1. Mr. A Anand (Indian Expatriate) Head of Admin
2. Mr. Amos Olajide – Head of Department, Ground Operations
3. Mr. Ogboru – Director
4. Capt. Don Chukwura – Head of Department, Safety
5. Mr. Jude Omeogu – Legal Officer
6. Mr. Bolaji Okusaga –  Communications Consultant to DANA Airlines
7. Dr. Oluwafemi Damilola Oke Osonyinlolu – GM, CEO, LASEMA
8. NEMA officials.
DANA AIRLINE EXPLAINS COMPENSATION/RESETTLEMENT PLAN/POLICY
DANA Airline’s Legal Adviser explained that the airline’s flight insurance scheme covers both air and ground losses, meaning that the compensation benefits will extend to families displaced by the crash. An unnamed British-owned insurance company has begun preliminary investigations and assessment of the on-ground damage. So far, the crash affected six families, and un-ascertained number of persons living in the boys quarters and the printing press. “An arrangement has been made with a local landlord to provide temporary accommodation for the displaced until resettlement plans are finalized”, he said.
“Our immediate interest is to ensure their comfort while we work out the details of the compensation scheme. Calculating the compensation benefits for ground losses requires technical expertise provided by forensic experts, property valuers, realtors, and assesors of domestic goods and services. SPACES FOR CHANGE demanded to know the exact length of time the investigation and pre-assessment undertakings would take; and requested them to make available the insurance policies and compensation working documents so that it may independently verify that the rights of the displaced persons are not compromised. S4C also requested them to publicize the reports of the crash investigations, including furnishing the survivors with findings.
The director and communication consultant pledged the company’s commitment to transparency in all phases of the compensation and resettlement plans. A further meeting to discuss these concerns in greater detail, was proposed.
ARRANGEMENTS FOR ALTERNATIVE ACCOMMODATION 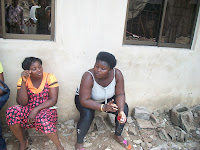 Displaced residents claimed that the Lagos State government forcefully moved them to a relief camp in Ayobo area of Lagos on the day of the incident. Most of them left the camp the following day on the grounds that the relief camp was too distant from their businesses, children’s schools, relatives and community support networks. They also complained about the poor quality of the meals served at the camp.

Ostensibly irked by the refusal of the survivors to stay in the camp, the LASEMA boss told SPACES FOR CHANGE that an acceptance of the temporary housing at the relief camp is a condition for benefiting from the Lagos State government’s housing support and other forms of assistance. When asked to clarify the plans in place to permanently resettle the victims, he explained that “persons who refuse to stay at the camp may be excluded in the resettlement discussions and as such, may not benefit from the planned housing support. Regarding the school children’s education, the State Ministry of Education will relocate all school children to new schools near the relief camp since schools across the state use the same curriculum”. S4C’s appeals to him to consider the community concerns were not accepted.

Presently, all the survivors – except three small children orphaned by the crash – are staying at the home of a kind-hearted neighbour, Mr. Chike Okwuosa. He presently coordinates relief efforts, and supports their feeding.  He vehemently denied claims by Dana Airlines’ Legal Officer suggesting that the airline paid or liaised with him to provide temporary accommodation to victims.”The displaced families are my neighbours. I am doing this out of my own free will”, he told SPACES FOR CHANGE.

While it is true that some organizations had donated relief materials, survivors were full of complaints about the uncoordinated and chaotic relief distribution methods. Consequently, the actual victims did not benefit. While they eagerly look forward to receiving some relief assistance from the Lagos State government, DANA Airlines donated beddings, food and household supplies to them today, days after the crash.

All the survivors lost all their personal properties to the crash. “I was taking my bath when i heard a loud explosion. I quickly raced out the bathroom without any clothes on. I lost everything”, Adebayo Bidemi told SPACES FOR CHANGE. Other residents told similar tales of grief and misery.
WHY EMERGENCY FAILED 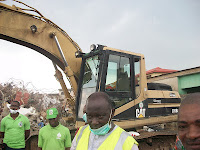 According to NEMA and LASEMA officials, emergency assistance and rescue efforts failed for the following reasons:
1. Bad roads: The road leading to the community is so bad that it took emergency officials several minutes and hours before they could access the crash site
2. Residents’ low-level of awareness regarding emergency response procedures: Most residents were totally ignorant of the self-help or localized methods of rescue operations. Majority of them were also too afraid of an impending explosion, and dared not go near the aircraft despite noticing that the passengers were in clear danger. Many residents recounted that they watched the passengers as they hit the aircraft’s windows and screamed for help.
3. All the access points into the building were barricaded with heavy metal protectors and burglary proofs. NEMA officials recalled seeing crying mothers and babies on the first floor. By the time they broke the walls, metal protectors and gained access to the apartments, the occupants had already died of suffocation.
4. Late arrival of the choppers: The emergency crew requested for reinforcement when they realized the difficulty in accessing the crash site by road. By the time the choppers arrived, the plane had exploded, making rescue operations even more difficult. An official who would not want to be named stated that LASEMA had no choppers, and had banked on the early arrival of NEMA’s choppers
IDENTITY ISSUES
DANA’s management decried the problems of identity arising from the plane crash. Some of the bodies are still unclaimed and it appears their relatives are not aware they were involved in the crash. They found that some of the passengers used other people’s tickets, or patronized touts when purchasing their tickets. As such, names other than their own appeared on the manifest. Identification has been made easier by the information contained on the identity cards of the victims. Checks on their luggage revealed useful data that is currently assisting their investigations and assessments of the compensation claims. DNA experts has been invited to conduct further enquiries on the bodies to establish the identity of deceased persons.
SPACES FOR CHANGE remains committed to working with the crash survivors to get adequate adequate compensation and resettlement, and to vigorously monitor the airline’s handling and payment of the victims’ benefits.