#ENDSARS: MOVING FROM PROTESTS TO REFORMS 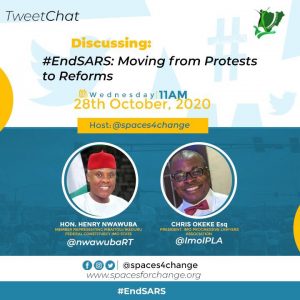 To broaden the push for positive structural changes and policy reforms in the wake of the #ENDSARS nationwide protests against police brutality and extrajudicial killings in Nigeria, SPACES FOR CHANGE | S4C  hosted a tweet-chat with Honorable Henry Nwawuba, member of the Federal House of Representatives, representing Mbaitolu/Ikeduru Federal Constituency of Imo State, and Chris Okeke, President of Imo Progressive Lawyers Association (IPLA) on October 28, 2020. Beyond sharing their reflections on the protests, they proffered far-reaching recommendations for improving the legal environment for human rights protection and reshape the economy for the better in ways that ensure sustainable, innovative and resilient nation-rebuilding.

The two-hour tweet session, tagged, Moving from Protests to Reforms, moderated by Victoria Ibezim-Ohaeri, the Executive Director of S4C started with a discussion examining whether the sudden explosion of youth anger across the country was a surprise to the government and political leaders alike. Describing the nationwide expression of anger as a pleasant surprise, Hon. Nwawuba explained that despite the mounting security challenges, the consciousness of citizens had never been awakened before as was witnessed during the protests.  The five-point demands of the protesters were legitimate and provide the basis for constructive engagement between the people and the government. The President’s acceptance of the protesters’ five-point demands is the first step towards addressing security challenges and the complaints of police brutality in Nigeria.

Accepting the demands of protesters is one thing, translating the demands to actionable plans that can be implemented in the short-, medium- and long-term is another. Hon. Nwawuba serves as the current chair of the 9th House of Representatives Legislative Agenda. In this connection, he disclosed the steps the lower legislative chamber is taking to prioritize the rights and dignity of citizens in their legislative agenda. Plans are underway to put forward A Bill for an Act to Establish A Police Special Commission with the mandate to receive and review cases of police misconduct, abuse of authority and human rights violations perpetrated by officers of the Nigerian police between January 2010 to date. When passed into law, it holds enormous potential for redressing past and future cases of police misconduct and brutality. A similar Police Reform Bill, that recently secured the parliamentary nod aims to address concerns around the welfare and professionalism in the Nigeria Police Force and it will also set up complaint procedures that expand access to justice for victims of police brutality.

Again, Hon. Henry Nwawuba condemned the Nwaorieubi massacre in strong terms, reiterating the demand for independent investigation and prosecution of the erring soldiers responsible for the bloodbath in Nwaorieubi community in Imo State on October 21, a day after the alleged shooting of protesters at Lekki tollgate by Nigerian soldiers.  A dialogue forum between the people and law enforcement agencies will also be set up to prevent future reprisals in the community.

IPLA’s Chris Okeke elucidated the recourse mechanisms available to protesters and victims of brutality by Nigerian security forces. The Judicial Panel of Inquiry recently set up in different parts of the country are essentially fact-finding panels and their decisions are not immediately enforceable. This means that aggrieved persons still need to seek redress in a court of law. IPLA issued a statement in October commending the courage of the Nigerian youth, who vociferously marched together irrespective of gender, tribe and religion, to demand far-reaching police reforms and the improvement of social and living conditions in the country. Their peaceful and well-coordinated protests across the country, sent a loud and clear message which reverberated strongly across the country and the whole world.

IPLA stands ready to provide legal support and assistance to victims seeking justice for SARS atrocities, with a view towards expanding access to justice. They are also committed to defending the rights and interests of individuals, groups and Imo communities, including security operatives adversely affected by the recent agitations as part of efforts to reassure the aggrieved to shun jungle justice, thereby preventing or reducing the risk of further violence in the state.