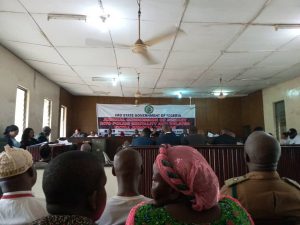 SPACES FOR CHANGE|S4C is extending free legal representation and support to more victims of police brutality, extra-judicial killings and #EndSARS protests at the Independent Investigative Panel on Human Rights Violations by Defunct Special Anti-Robbery Squad (SARS) and Other Units of the Nigerian Police Force (“the Panel”), holding at the National Human Rights Commission Secretariat in Abuja, Federal Capital Territory (FCT). S4C’s petition filed on behalf of Mr. SXZ, a teenager, who was shot in his home in the central area of the FCT sometime in 2020, by officers of the defunct Special Anti-Robbery Squad (SARS) came up for hearing on February 26. Mr. SXZ was shot several times on his right hand, illegally detained and denied access to healthcare for several days by SARS officers who claimed to be investigating a kidnap case in the area. The incident left SXZ with a severe nerve damage of his right hand.

At the March 26 Panel hearing, S4C’s legal team led evidence in support of the Petitioner’s case and tendered additional information to back up the facts established in the petition against the Respondents: Officer in Charge of SARS, Guzape Division, Abuja; FCT Commissioner of Police and the Inspector General of the Police (IGP). The Petitioner, SXZ, also testified before the panel, recounting the horrific details of his ordeal at the hands of SARS officers. SXZ, is still undergoing treatment and therapy due to the loss of nervous coordination on his right hand caused by the gunshots. The treatment and therapy sessions have also drained his finances. Concluding his testimony, the Petitioner demanded compensation in the sum of Three Hundred Million Naira (N300,000.00) for the trauma, illegal detention, cost of medical expenses and the violation of his constitutional rights prohibiting torture and inhuman treatment. He also prayed the Panel to order the release of his mobile phones, computer and other personal belongings that were illegally taken from him and his relatives by SARS operatives. The Petitioner also demanded a public apology from the office of the IGP.

Counsel to the Respondents admitted that the Petitioner is a victim of police brutality. He promised to ensure the return of the phones and computer seized from the Petitioner and his relatives. He, however, informed the Panel that the Petitioner is currently before High Court of the Federal Capital Territory on the same subject matter. The Panel directed Respondents’ counsel to identify the officers involved in shooting the Petitioner so that they can be brought to justice. The matter was further adjourned to 13th April, 2021 for cross-examination and possible conclusion of hearing.

Similarly, at the February 22 hearing of the Imo State Judicial Commission of Inquiry into Police Brutality and Related Extrajudicial Killings holding at Owerri, S4C’s Legal Officer, Kingsley Ogam-Okafor, Esq. moved a motion for the Commission of Inquiry to consolidate multiple petitions brought by family members in respect of the same matter. The Commission granted the request, resulting in the striking out of subsequent petitions and collapsing the claims in one brief. At the previous hearing, Mrs O’s matter in respect of late EO shot and killed by officers of 34 Artillery Brigade of the Nigerian Army, Obinze, Imo State could not go on due to some misunderstanding over who should represent the family in the matter. With that consolidation, the matter proceeded to hearing.

S4C led Mrs. O, the deceased’s wife in evidence. She adopted the petition before the Commission of Inquiry and demanded compensation in the sum of One Hundred Million Naira for the extrajudicial killing of her husband by military officers of 34 Artillery Brigade of the Nigerian Army during the #EndSARS protests. Because the Respondent (Commandant of the 34 Artillery Brigade, Obinze or their legal representatives) were absent, and as such, could not cross-examine the Petitioner, S4C moved another motion to foreclose the Nigerian Army from cross examining the petitioner. The motion was hinged on the antecedents of the Respondents in failing to appear before the Judicial Panel since the commencement of the panel sittings. Their nonchalant attitude to the proceedings further evinces a disdain for the Commission.

Members of the  legal team are Omotayo Odukola, Legal Officer at SPACES FOR CHANGE  and Eroga Godspower of the Network of Probono Lawyers. The matter was adjourned to March 8 for the adoption of final address. S4C is continuing to provide legal representation to victims of police brutality and #EndSARS protests with support from the Fund for Global Human Rights (FGHR).