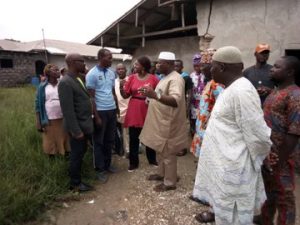 Few months after participating in the high-level panel dubbed Integrating Community Rights, Priorities, and Expectations into the Lagos Resilience Agenda, which SPACES FOR CHANGE | S4C organized at the Resilient Lagos Week (RLW) in April 2019, the Lagos State Water Corporation contacted the organization with a request to nominate two informal communities that could be considered for immediate connection to the state’s pipe-borne water network. At the RLW panel, S4C had strongly advocated for the extension of basic amenities and services to Lagos’ under-served communities in order to improve the access of the urban poor to basic infrastructure and services, especially safe drinking water and adequate housing. The nomination process kicked off with a meeting held on July 4, 2019, which brought together Lagos State Water Corporation officials with the women, youth and traditional representatives of 14 informal communities advancing their collective concerns under the umbrella of the Communities Alliance Against Displacement (CAD).

Ms. Titilola Bright Oludami led the Water Corporation team to the first meeting. Through the proposed water initiatives, the new administration of Lagos State is determined to ‘ease the burden of the urban poor living in the so-called blighted communities,’ she explained. Communities that would benefit from the water projects must satisfy a minimum criteria, which include: having a population size of 5,000 persons and above; presence of clustered houses in the community for ease of connection; have land space to install water facilities; community cooperation including a commitment to use the water supplied; pay applicable water rates; an assurance of community protection and a commitment to bear the cost of maintenance of the water facilities, among others.

Using the criteria advanced by the Lagos State Water Corporation, the community representatives present unanimously selected Ago-Egun and Igbo-Alejo communities for the pilot phase of the water facility intervention. Afterwards, the Corporation announced that the next step is to design the appropriate water connection system for the selected communities. This step would be preceded by some fundamental preparatory steps such as community visitation, surveying proposed sites for water facility installation, collection of water samples for testing and analysis, among others. The reports of the tests conducted in the communities would be submitted to the state authorities for analysis, which would in turn inform their consideration of communities for ultimate approval.

The first port of call for the project visitation exercise is Ago-Egun community. The July 11, 2019 visit afforded S4C, CAD and the Water Corporation officials a firsthand opportunity to meet with community leaders and stakeholders within the community to determine the proposed site for the water facility installation. The officials also collected water samples from existing privately-owned water pumps for testing and analysis. During the tour, the Lagos Corporation officials interviewed community members on their water supply experiences, collating data on household spending on water supplies, while collecting water samples for analysis. They also requested for the community layout plan which would inform the appropriate citing of the facility.

On July 19, 2019, the next port of call was Igbo-elejo community, also known as Snake Island. S4C and CAD members joined residents of Igbo-elejo island (including women, youth and men) to welcome the Lagos Water Corporation officials to their community. In his opening remarks, the Baale of the community, Chief Aderibole Adeiye informed the Corporation how the inhabitants of the island either rely on rain water or purchase water from the Mainland, with the attendant implication on costs, productivity and wellbeing.  The residents are predominantly low-income earners involved in fishing.  As one resident lamented:

‘Children go to school late or go to bed late at night due to the arduous task of fetching water on a daily basis.’

After listening to the community’s pressing water concerns, the Water Corporation officials reiterated their terms of operation: community patronage, the protection and maintenance of the installed water facilities, payment of water rates among others. On this point, the Snake Island community representatives restated their collective commitment to comply with the terms and conditions of the project. The Baale also used the opportunity to express his appreciation to the state government for the completion of the community primary school project.

The visitation ended with a tour of the entire community to assess the local environment and interact with the various interest groups within the community. As with Ago-egun community, the officials took water samples from local wells, collating other important information that can enrich project planning. The Baale of Snake Island was one of the panelists at S4C’s panel session at RLW2019 where he discussed the critical infrastructural deficits in his community and other similarly-situated settlements across Lagos State. The elated Baale could not hide his excitement seeing how what started as a panel discussion is now metamorphosing into concrete benefits for local communities.