Going to Maiduguri 4: Its Time to Stop the Violence

Spaces for Change’s latest report, Demolishing Foundations of Peace, found that North East Nigeria is one of the most dangerous places in the world to be a youth, especially a male teen. Among other findings, the study noted that young males were disproportionately targeted with violence in Borno, Kano, Yobe, Plateau and Bauchi states.  Last week’s reported killing of 40 youths by security forces in Maiduguri attest to the frighteningly alarming dimension the counter-insurgency operations has assumed. 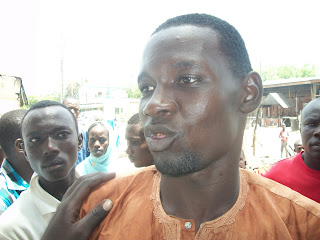 Slum, rural neighbourhoods and other areas with very high concentration of youth populations are often criminalized, and on that basis, raided repeatedly during manhunt exercises for members of the Boko Haram sect. Trapped in the middle of persisting fierce confrontations between the Islamic sect and JTF soldiers, there’s hardly any family within communities like Budum, Kaleri, Abagaram, Zannari, Bulumkutu, that has not lost a male son, male relative, uncle or father in the cycle of violence that has enveloped the state for almost 3 years.

In Maiduguri, the horrendous shooting and killing of young males by security forces is largely undocumented; a situation worsened by inadequate media reportage of the volatile situation in the state.  Scores of newsmen I interviewed at the Borno State House (Borno State Governor’s Office, Maiduguri) openly expressed revulsion towards visiting designated flashpoints in the state. Selective media coverage encourages under-reporting of the crisis, limits access to credible information while preventing help from reaching those in critical need.  Disconcertingly too, the often-censored news reports are rarely accompanied by the narratives of the people caught in the middle of this spiraling conflict – the inhabitants of the Maiduguri.
A closed-door meeting at the home of the village head (Bulama of Gilimanti Ward 2) of Budum community, Maiduguri with about 50 elders and local youth in attendance, triggered a frank discussion about the brutal killings, unlawful arrests, detention and harassment of Maiduguri communities and inhabitants. Listening to the plethora of personal accounts shared by owners of razed cars, buildings, shops, relatives of slain and detained youths among several others, afforded a first-hand opportunity to document how local residents are bearing the brunt of military fury. 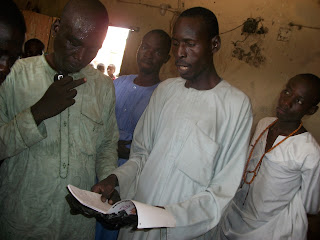 Seizing that moment of agonizing frankness, I disclosed my keenness to meet with representatives of the Boko Haram sect, and to understand the extent of the communities’ alleged involvement in the sect’s activities, either by way of providing shelter or tacitly supporting the sect’s terror activities. The residents swore they have nothing to do with the sect, and further suggest that the attackers could be foreigners from neighbouring Niger and Mali. Age-long familiar ties with those neighbouring countries, and the porous borders criss-crossing the entire state unhinders ingress and egress of foreigners into local communities.
One thing is clear: the unsubstantiated branding of Maiduguri communities as habourers of terrorists is rife, forcing public sympathy for the mass killings to wane. So bad is this negative branding that the mere mention of certain communities such as Budum invokes images of deranged young people blowing themselves up and overtly conniving with Boko Haram members to facilitate violent terror attacks. This is totally unfounded! The interactions with local residents also exposed that the greater the force employed by the JTF, the more hesitant or unwilling affected populations are, to cooperate and provide information to security operatives. Absolute mistrust and fear continue to characterize the relationship between the security operatives and the civilian populations, undermining intelligence undertakings that would lead to the definite identification and extirpation of the sect’s members and activities. 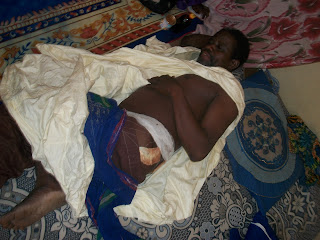 After the one hour-long closed door meeting, a handful of local youths took turns to show me round their burnt shops, displaying their blackened tailoring machines, textiles and wares. When the frantic search for my driver, Sani, seemed futile, a local youth enthusiastically provided a motorcycle that conveyed me and Kaigama to the home of Alhaji Sani Mohammed, hit by JTF soldiers’ stray bullets. Still groaning in pains, and assisted to a sitting position by one of his sons, he showed me the blood-soaked gunshot wound on his waist. Alhaji Mohammed was shopping at the market when the army struck, unleashing terror on everybody and every object insight. The closure of several hospitals, combined with the fear of possible arrest and future attacks propelled him to resort to home-treatment rendered by a local “chemist”.
Corroborating the accounts of several persons interviewed earlier, “I have never heard so much gun shots in my entire life. People were running and many were falling. I saw JTF soldiers loading dead bodies into their truck,” he said.
Reiterated claims of soldiers taking corpses away prompted my visit to the University of Maiduguri Teaching Hospital mortuary. Officials were too afraid to speak or be drawn into any Boko Haram-related discussion. Luckily, Sani’s (my driver’s) located an uncle, a senior medial officer, who worked in the Maxillofacial and Dental Unit of the Hospital. With the help of Sani’s uncle, I had access to medical records, and was able to discuss with a few doctors and paramedical personnel. Off-the-mark statistics shared by the doctors affirmed an astronomical increase in the number of patients receiving treatment for gunshot wounds and life-threatening facial injuries.  Routinely too, the hospital authorities conduct mass burials for bullet-riddled corpses dumped at the mortuary by soldiers. Speaking disapprovingly of JTF’s extreme use of force in the handling of the Boko Haram insurgency, the doctors confirmed that most of the victims, (both the dead and the injured) if not all, were young males, with varying degrees of gunshot wounds.
Leaving the hospital, I went to other predominantly Muslim settlements such as Kaleri and Gomari that have also been the locale of fiery JTF interventions. At every 100 meters stood a military check with soldiers boldly displaying AK-47 rifles with the look of death in their eyes. The community wore a forlorn look, and eerie silence pervading the entire locality loudly announced an unspoken despair. Many residents have fled their homes, just as the heavy military presence is increasing the psychological and economic strain on the general population. The security crisis forced the closure of the only two public schools in Gomari community, leaving many children of school age without access to education. 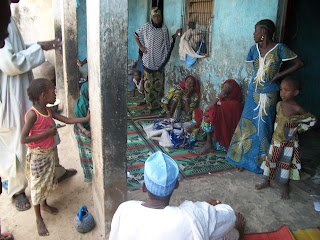 Large numbers of people, especially women vehemently refused to answer any questions bordering on the activities of the sect. All the men I interviewed, including a vocal local imam – that runs an Islamiya School in Gomari – strongly objected to questions suggesting that Boko Haram sect members were being haboured within their communities. The locals insisted that all those captured and killed by the soldiers are innocent citizens who have nothing to do with the Boko Haram sect. For instance, a week before my visit, a doctor, staff of the University of Maiduguri Teaching Hospital was brutally murdered, alongside 11 other men by JTF soldiers minutes after a bomb exploded beside a primary school in Kaleri. The late doctor and his wife were driving past the school at the time of the incident. In line with JTF’s combat strategy of marking  every human within the vicinity of an explosion site as a military target, he was among the 12 men sprayed with bullets. The Borno State Governor, Kashim Shettima profusely apologized for the error, and compensated grieving families. Stories of similar gaffes abound.

Totally incensed by the deluge of harrowing stories and experiences shared both by victims and eye witnesses, I stormed the Headquarters  of the Nigeria Police Force (NPF) in Maiduguri to present the freshly-collected evidence of extrajudicial killings to the authorities, as a basis for demanding for justice for the affected populations. In my discussions with very senior police officers in charge of field and anti-bomb operations in the state, my advocacy harped on the need to urgently review the JTF’s operational methods, and for combat strategies to be aligned with the democratic environment and respect for human rights. The police authorities neither affirmed nor denied the killings, but lectured me on the origin, trigger factors, and hazardous nature of Boko Haram’s campaign of terror. This was a different type of warfare, requiring different training and weapons. I also learned about the technical, intelligence, social and logistical readiness of the NPF for a specialized combat operation, and how they manage the high costs associated with such large scale warfare.
While it is true that deteriorating security situation necessitated the State’s security apparatus, Operation Flush, to be subsumed into the (Federal Government-controlled) JTF, however, the command chain, the tactical disposition and crime busting strategies of the police (NPF) and the military(JTF) remain fairly distinct. For instance, I observed that while the police highly favoured an anti-terror approach centered on community policing and intelligence gathering, the military emphasized deterrence and preemption. In seeking to deter attacks from the insurgents, JTF emphasizes a strategy based on massive responses to attacks, resulting in high collateral damages. It became clearer to me why increasing calls for JTF’s withdrawal had persisted, while local preference for the police (NPF) takeover soars.  Such calls are however, seemingly oblivious of the police’s (NPF’s) lack of strategic depth and its impossibility of maintaining reserve mobilization for an extended period.
Armed with that detailed background information about the counter-terrorism operations, I headed straight to the JTF Headquarters at Ponponmari, Maiduguri.
To be continued.