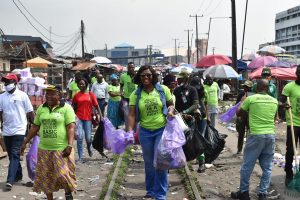 In commemoration of World Habitat Day, marked annually on the first Monday in the month of October, SPACES FOR CHANGE | S4C and Communities Alliance against Displacement (CAD), in collaboration with the Lagos State Resilience Office (LASRO), the Lagos Waste Management Authority (LAWMA), and the Lagos Mainland Local Government co-hosted a series of events themed – Community Participation in Flood Control and Mitigation Strategies in Lagos State.

The World Habitat Day event held on the 5th of October 2020 was divided into two sessions: a community-wide clean-up exercise in 7 informal communities within the Local Mainland Local Government Area — Otto, Ifeoluwa, Ifesowapo, Atitebi Ogba-Elefo, Ottumara, and Toluwani — and a townhall featuring bespoke presentations on a wide range of issues relating to flood control and disaster management in the informal settlements.

Flagging off the celebration with a clean-up exercise led by S4C director, Victoria Ibezim-Ohaeri, Lagos State’s Deputy Chief Resilience Officer, Dr. Dania Folayinka and the Vice-Chairman of the Lagos Mainland Local Government, Honorable Jubril Emilagba, the trio led residents on a tour of the communities, collecting waste materials along the way while isolating those of a recyclable nature. The clean-up exercise was preceded by a pep-talk delivered by the officials of the Recycling Department of the Lagos Waste Management Authority (LAWMA). They enlightened participants on how to sort recyclable materials. This involved a separation of the trash deposited in the bags containing solid waste from other bags containing recyclable materials.

As the team moved from community to community, they sensitized residents on the importance of environmental cleanliness and responsible waste disposal.  Irresponsible disposal of refuse blights the community and clogs drainage channels which ultimately results in flooding and the accompanying disastrous consequences. Communities were also discouraged from patronizing cart pushers who collect and dispose refuse in ways that harm the environment.  Upon seeing their vice-chairman and revered grassroot leader among the crew, many excited residents  happily joined the clean-up exercise. Singing songs of solidarity as they marched along, they cleaned out the streets and the drainages. The vice-chairman took further steps to ensure that stores, kiosks and restaurants within the neighborhood conformed to environmental regulations and government-approved standards. He also cautioned erring residents to ensure compliance with state directives. The recyclable materials retrieved included pet containers, aluminum can containers, pure water sachets, plastic and lid covers, polythene bags among others. Total amount of recyclable waste collected is 808 which weighed about 16 kilograms.

After the clean-up exercise, the group assembled at Eugenia Hall in Ebutte-Metta, Lagos where the townhall took place. S4C’s Executive Director, Victoria Ibezim-Ohaeri discussed the flooding projections issued by the Nigerian Hydrological Service which warned about unprecedented flooding in certain states, including Lagos between May and October 2020. Appraising state responses to the flood warnings, she urged communities to contribute their own quota towards preventing and reducing the impacts of flooding in their communities.

LASRO representative, Mr Adebayo Ade-ojo stated that clean-up exercises form part of the core strategies the agency deploys to increase the capacity of individuals and communities to survive and adapt to urban shocks and stresses. He reaffirmed LASRO’s commitment to empowering communities to withstand heavy downpours and prevent flooding. Townhalls of this nature targeted at flood mitigation and control have been outlined as part of LASRO’s core activities in 2021. The collaboration with and S4C Communities Alliance against Displacement represents the kind of strategic alliances  LASRO has forged with a broad spectrum of stakeholders to take advocacy to the doorsteps of flood-prone regions that face different flood hazards.

Alhaji Tajudeen Quadri, the chairman of the Community Development Committee and representative for the Lagos Mainland Local Government Chairman highlighted the various measures the local government council had put in place to guard against flooding and the wanton disposal of refuse.  He also applauded the efforts of S4C and CAD for initiating the clean-up exercise and pledged his continued support towards the attainment of the goal of cleaner and healthier communities.

The presentations sparked vibrant discussions between the speakers and the participants. Several questions were asked regarding the modalities for community involvement in recycling, improving access to sanitation and waste disposal services, especially by increasing the frequency of PSP visits to the community as a strategy for reducing dependence on cart-pushers.

In response to some of the queries, the Managing Director of TRASHUSERS explained the concept of recycling, the nature of materials that can be recycled and how communities can convert waste to wealth. Locals can get paid when they deliver a certain amount of recyclable materials to the recycling companies.   Regarding community requests for increased frequency of PSP visits to the community, the LAWMA representative, Engr. Akinbulo Ayobami, urged residents to pay for LAWMA’ waste disposal services instead of patronizing local truck pushers. These truck pushers end up disposing the trash in canals and this blocks the drainages even further. He also added that the Lagos State government is making an effort to ensure that LAWMA has more trucks for transporting disposed waste.

The interactive session ended with the elated participants having all their questions answered. In the same vein, residents resolved to dispose their waste more responsibly and ensure that the drainages in their communities are not  blocked by refuse and recyclable materials.