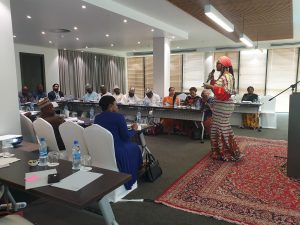 SPACES FOR CHANGE [S4C] facilitated a knowledge sharing session on Civil Society Organizations and Development Support Oversight at the retreat of the House of Representatives’ Committee on Civil Societies and Development Partners, held in Lagos in March 2020. The Committee invited S4C as a resource person to provide federal lawmakers with an expert advisory opinion on the state of regulatory environment for non-profits and development aid partners in Nigeria.

The session began by introducing the legal foundations for the establishment of civil society and civil society organizations (CSOs). Section 40 of the 1999 Constitution of Nigeria guarantees the right of every person to assemble freely and associate with other persons, and in particular,  form or belong to any political party, trade union or any other association for the protection of his interests. A third critical dimension of the freedom of association & assembly is the right to participate meaningfully in public life, including participating in, and influencing processes of public deliberation and decision-making. (See UNHCR in its 2013 Resolution). Inherent in the above is the right of citizens and CSOs to act as independent watchdogs, influence government decisions and advocate for better governance processes.

From the discussion around the legal and ideological underpinning for civil society evolution, S4C’s Compliance Officer, Sola Olutayo Esq. clarified the composition of the sector and the 4-step modalities involved in the registration and formalization of non-governmental set-ups in Nigeria.  She walked participants through the various laws implicated at each stage, the implementing agencies and the effects of non-compliance.

The prevalent notion out there is that the civil society sector, including non-governmental organizations (NGOs), are not adequately regulated. Why is this so? S4C’s director, Victoria Ibezim-Ohaeri extensively interrogated the myth about NGO regulation in Nigeria.  NGO regulation is fragmented across several state and federal departments, with overlapping regulatory functions. After explaining the gamut of legal regimes, mechanisms, ministerial regulations, including the reporting obligations of NGOs to both federal entities and international development partners, the federal lawmakers raised concerns about the gradual drift towards over-regulating the sector, thereby making it difficult for help to reach those in greatest need, especially in the hard-to-reach locations and conflict-affected zones.

Another myth worthy of interrogation is the whether terrorists can indeed, abuse NGO entities to facilitate their terrorist operations.   Citing various provisions of Financial Action Task Force’s (FATF’s) Recommendation 8, the Interpretative Notes and the Best Practice Paper, Ms. Ohaeri addressed the question of high-risk organizations that are vulnerable to terrorism financing and what can be done to ameliorate the risk.  High-risk organizations need to be identified through a risk assessment to identify not only which NPOs are at risk, but the extent of resources and efforts to be allocated toward countering the risks.  In summary, FATF’s R8 says: “[n]ot all NPOs are high risk, and some may represent little or no risk at all. It may be possible that existing measures are sufficient to address the current terrorism financing (TF) risks to the NPO sector identified in a country, although periodic reviews may identify new or evolved TF risks over time.”

In closing, SPACES FOR CHANGE argued that the problem with development support oversight in Nigeria is not a lack of laws, but rather, a lack of strong and independent institutions with the political will to implement existing laws and regulations effectively. Mere proliferation of laws and regulations does not necessarily translate to results.  What the government needs to do is to strengthen the plethora of existing regulatory frameworks and mechanisms applicable to NPOs such as the CAC, NPC, SCUML, FIRS, EFCC etc. Merely introducing another regulator for the civil society sector, without strengthening democratic institutions, particularly the investigative, prosecutorial and adjudicative capacities of existing regulatory bodies that exercise oversight over corporate entities, will simply impose unnecessary burdens on legitimate charitable operations of civil society organizations, and of course, lead to over-regulation.

The chair of the Committee, Honorable Kabiru Idris, thanked SPACES FOR CHANGE for providing evidence-based advisory which deepened their understanding of existing legal regimes applicable to civil society, including the justification for and effectiveness of new regulations to enhance development aid oversight. In one voice, committee members resolved not to take any steps or consider any legislative proposal that will stress the civil society sector any further.

The retreat was organized by the House of Representatives’ Committee on Civil Societies and Development Partners in conjunction with the Policy and Legal Advocacy Center (PLAC).