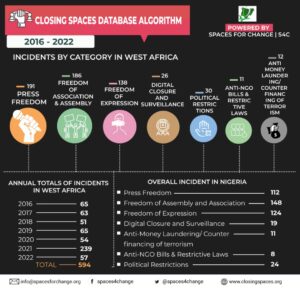 Starting from 2016, SPACES FOR CHANGE | S4C has been curating incidents of closing civic space in Nigeria on the Closing Spaces Database: www.closingspaces.org. Beyond tracking and documenting the drivers, perpetrators, victims, tactics, and the flashpoints of shrinking civil society space in the West Africa sub-region, the database groups the incidents tracked into eight distinct legal categories: press freedom, freedom of association and assembly, freedom of expression, digital closures, political restrictions, anti-NGO bills and anti-money laundering and countering financing and terrorism (AML/CFT). The word civic space refers to a “set of conditions” that govern how freely, effectively, and without hindrance, all members of society can exercise their fundamental rights to speak, assembly, associate and organize as well as participate in the governance of their country either as individuals or in unofficial or organized groups. The evidence shows that the civic space is narrowing and heavily under attack across the West Africa subregion.

As of July 2022, the incidents in West Africa tracked and documented on the database between May 2016 and July 2022 show that press freedoms (191 incidents) and assembly/association rights (I86 incidents) have been backsliding more than ever, followed by the freedom of expression (138 incidents). Out of the 191 incidents of crackdowns on press/media freedoms, 112 were recorded in Nigeria alone. The database results on press freedom corroborate the findings of other independent studies like Reporters Without Borders showing that Nigeria is one of the West African nations with the most dangerous and challenging environments for journalists, who are frequently surveilled, attacked, arbitrarily detained, or even assassinated.

On the other hand, the freedom of assembly and association are related rights but are not interchangeable. The former encompasses the right to collectively participate in peaceful demonstrations, protests, strikes, or gatherings for a specific purpose, while the latter includes the right to form or join a group, for a specific purpose. This category recorded the highest hit in Nigeria, with a whopping 148 out of the 186 incidents tracked. The reason for this is not far-fetched: heavy clampdowns on protesters across the country have been documented in a litany of reports. Major examples include the violent disruption of the June 12, 2021 protests in commemoration of Democracy Day and the brutalization of the October 2020 #ENDSARS protesters. The freedom of assembly, association, and expression are flagrantly violated when peaceful protests are criminalized or disrupted and demonstrators punished severely for either organizing or participating in them. Other tactics popularly used to repress this right include the deployment of heavy police personnel or stationing armored carriers at the protest grounds to intimidate, arrest, and fire at protesters during protests.

The freedom of expression recorded 138 incidents in the subregion, with 124 alone happening in Nigeria. This freedom encapsulates the right to speak freely online and offline, the right to access information, critique, oppose the same and publicly express concerns about developments in the country without fear of retaliation from the state actors. Recently, the chief judge of Akwa Ibom, sent fiery social critic and human rights lawyer, Inibehe Effiong, to prison reportedly over a plea for safety during court proceedings. In Ghana, #FixTheCountry Movement lead convener, Oliver Barker-Vormawor, was arrested for the second time while on his way to court. In the northern part of Nigeria, religious extremists mobbed and killed a young woman for making comments perceived to be blasphemous while Nigerian atheist and humanist, Mubarak Bala, has been detained without charge by the police for a year over alleged blasphemy. Most of these incidents arose from merely expressing thoughts or posting critical commentary on social media.

With 30 and 26 incidents respectively, political restrictions and digital closures are next in the line of categories of civic space restrictions observed in the West African sub-region. Political restrictions refer to incidents widely perceived to be politically-motivated attacks and prosecutions on opposition politicians (and their family members and allies), underscoring how political differences have become another driver of closing civic space in the subregion. For instance, a court in the Benin Republic sentenced an opposition leader to 10 years imprisonment while Senegalese Opposition leader Ousmane Sonko was arrested on Wednesday, March 3, 2021 on his way to court. In Nigeria, records show that opposition politicians are being denied access to public facilities for their campaigns while some are declared wanted, arrested, detained, or prosecuted on the orders of state executives.

19 out of the 26 incidents of digital closure tracked in the West Africa sub-region occurred in Nigeria. Digital closures typically take the form of the introduction of legislation to regulate social media, increased importation of surveillance technologies, interception of private communications, distributed network attacks, or distributed denial-of-service (DDoS) attacks on media websites such as experienced by Premium Times on February 28 and 29, 2020 as well as censorship of some media outlets.  Very restrictive provisions inserted into these legislations or regulations under the pretext of combatting hate speech, fake news, and misinformation have the effect of narrowing online civic spaces and limiting free expression, especially on digital platforms. Other forms of digital closure include bans or suspension of social media platforms like Nigeria’s 2021 Twitter ban and the corresponding directive to prosecute those who continue to use virtual private networks (VPN) to access the banned platform.

12 incidents of the use of AML/CFT regimes to limit civil society activities were documented during the period under review. The abuse of security and counterterrorism laws and tools to clamp down on the activities of civic actors is quite widespread. Counterterrorism laws are misused when they are invoked by state actors to recharacterize organized dissent as terrorism or when state agents use national security buzzwords to recolor purely democratic agitations such as was seen during the #ENDSARS protest in October 2020. Low violation statistics recorded in this category do not equate to official good behavior. Rather, the heavy sanctions and penalties attached to incidents of this nature make every single occurrence huge and significant. Sanctions often include forced closures of civil society or humanitarian organizations, deregistrations, suspension of operating licenses, prolonged arrests and detentions, including lengthy jail terms. Cases of this nature also attract huge reputational risks and damage to the victims. Nigeria’s newly-minted Terrorism Prevention Act 2022 empowers the Corporate Affairs Commission and the Special Control Unit on Money Laundering to refuse or revoke the registration of a non-profit organization, where there is proof that such a group is linked to a terrorist organization.

The rise of anti-NGO Bills in the subregion is another cause for concern. 8 out of the 11 incidents tracked in the subregion occurred in Nigeria. Due in part to the sustained advocacy and enlightenment campaigns by organizations like Spaces for Change, civil society organizations continue to galvanize joint action to push against the recurrent anti-NGO Bills and other restrictive legislative proposals tabled before the parliament in Nigeria.

The perpetrators of the restrictions recorded on the database are mostly state actors.  In terms of the gender dimension, more males are affected by these restrictions than women, with the ratio standing at 71.43% and 28.57% respectively.  The ratio of impact from country to country shows that Nigeria has experienced the highest number of crackdowns on the civic space in the West Africa sub-region. Nigeria’s 200million population, which is the size of about 6 or more West African countries put together possibly explains the high figures. Nonetheless, the records are concerning and demand urgent action to upturn the tide. Spikes in the violations of press freedoms, assembly/association rights, and the freedom of expression are expected as the national elections draw near in Nigeria.

The daily data collection on the Closing Spaces Database is synchronized and analyzed every six months. The routine tracking, data collection and periodic analysis on the database are supported by Ford Foundation and the Fund for Global Human Rights.