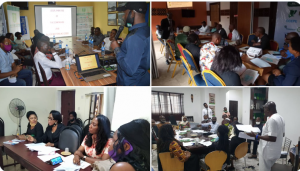 Deeply concerned about the latest revisions to Part F of the Companies and Allied Matters Act 2020 (CAMA 2020) applicable to non-profit entities in Nigeria, especially the potential for numerous provisions of the new law to undermine fundamental freedoms and shrink the civic space in Nigeria, the Action Group on Free Civic Space (AGFCS) convened a sensitization outreach on September 16, 2020 in Lagos. The outreach held simultaneously across four Nigerian states: Lagos, Imo, Rivers and Enugu, attracted more than 100 representatives of the Nigerian civil society, media, justice and religious communities. Member-organizations of the AGFCS across states convened the outreaches to deepen stakeholder understanding of the recent legislative amendments and the implications for the legitimate operations of civil society organisations in Nigeria.

Emmanuel Ikule’s (the National Coordinator of Network on Police Reforms in Nigeria (NOPRIN)) opening remarks at the Lagos outreach provided some insights into the rationale for the new law.  President Muhammadu Buhari had on August 7 assented to the legislative amendments to CAMA 1990, effectively repealing the previous statute after 30years. Although the statute was repealed to ease the doing business landscape by streamlining corporate governance processes with international best practices, certain provisions of the new law granted the government excessive regulatory powers, which if unchecked, could lead to the unwarranted targeting of non-profit organisations and impede their charitable operations.  More specifically, there is increased perception that sections 839, 842, 849, and other related provisions contained in Part F of the Act may be exploited to restrict the democratic freedoms of citizens to speak, associate and assemble freely.

While the introduction of legal reforms aimed at strengthening the corporate governance framework was laudable, the AGFCS insists that human rights and civil liberties cannot be sacrificed at the altar of upgrading the business environment. The press statement read by Mr. Samuel Akpologun, the Executive Director of Ace and Vanguard Legal Practitioners, shed light on the contentious provisions of the new law.  Provisions like sections 839, 842, 849 of the Act appear to be fixated on enlarging governmental powers to suspend and remove the trustees of an association, thereby taking over the administration or management the association’s property and bank credits.  Empowering the Commission to vest the association’s property in the hands of an official custodian, or order debtors to discharge their liabilities in an interest-yielding account held by the Commission for the benefit of the association, and to restrict the association’s transactions, confer excessive powers on the government to overly restrict or interfere with the operations of non-profits.

The presentation by Ms. Victoria Ibezim-Ohaeri, Executive Director of Spaces for Change delved deeper into CAMA’s legal provisions, comparing the latest statutory additions to the previous prescriptions, while explaining the fundamental shifts that are susceptible to regulatory overreach. For instance, while CAMA 1990 makes no provision for the classification of associations, Section 824 of CAMA2020 responds to the need for associations to be classified according to their risk exposure levels and operational spectrums. In the absence of a proper assessment of the entire sector and an accompanying risk-based approach for classifying organisations, it will be difficult for the government to develop bespoke regulatory measures for countering risks in a proportionate manner. Furthermore, Section 849 of the law empowers the Corporate Affairs Commission (CAC) to merge two or more associations with similar aims and objectives. This provision holds enormous potential to hurt constitutionally-protected association rights. The freedom of association allows citizens to freely chose who to associate with or not, as against a mandatory order.

The contentious of all the provisions is the Commission’s wide discretionary powers to suspend the trustees, employees, officers and agents of an association, including appointing an interim manager to oversee the operations of that association where key members have been suspended or removed on grounds of public interest, alleged misconduct or administrative mismanagement. The meaning of ‘public interest’ was not stated. Not only that, subjecting an association to the governance of a stranger or manager appointed by the Commission, who may not share any values in common with the association, also contravenes association rights and fair hearing provisions guaranteed by the Nigerian constitution. It also infringes on the independence of the association to choose their own governing and management affairs independently.

The interactive session provoked interesting debates about the constitutionality of the recent legal revisions. Participants also flagged additional concerns that could hinder effective implementation by state actors, and corresponding compliance on the part of regulated entities. Additional concerns highlighted include:

After intense deliberations, participants resolved to continue the sensitization outreaches across states, and in turn, increase the tempo of the group’s joint push for a review of the contentious provisions.  The Action Group on Free Civic Space represents a loose network of organizations, student unions, social movements and active citizens working on different thematic issues, but committed to ensuring that government regulation in the name of national security does not shrink the civic space in Nigeria.