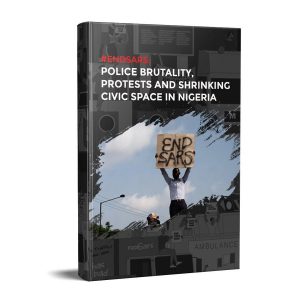 Clement Nyaletsossi Voule, the Special Rapporteur on Rights to Freedom of Peaceful Assembly & of Association authored the preface of the report. In a goodwill message at the opening session, Clement Nyaletsossi Voule  welcomed the research study as a well-written documentation of how the civic space has come under attack in many countries around the world, including Nigeria. He expressed serious concern about the increasing criminalisation of democratic freedoms, especially rights to expression, peaceful protests and the use of national security and public health safety laws by authoritarian governments to advance the crackdown on civic actors.  Along this line, he urged the Nigerian government to consider the report as a starting point for collaboration with civil society and citizens to, and work towards providing an enabling environment for citizens to freely exercise their democratic rights.

Presenting the research findings, Victoria Ibezim-Ohaeri of SPACES FOR CHANGE explained the structure, methodology and four key results of the study: the history and patterns of police violence in Nigeria, the ensuing #EndSARS protests, the crackdown on #EndSARS protesters and the dewdrops of good practice shifting the dynamics of civic space in the country. The report merged the findings of a joint-fact finding mission to investigate the activities of the disbanded Special Anti-Robbery Squad (SARS) in the South-east region of the country with an on-the-spot assessment of the #EndSARS protests undertaken across seven states in Nigeria by members of the AGFCS. The AGFCS mission documented the patterns used by the defunct SARS police to inflict violence on citizens. The identified patterns include prolonged detentions, denial of access to family members and legal representation, use of torture to elicit information from victims, killing detainees for fun, deliberate starvation of victims with intent to kill slowly and without proof, keeping detainees in overcrowded cells amongst others.

Okechukwu Nwanguma of Rule of Law and Accountability Centre (RULAAC) looked back on the numerous attempts by successive administrations to reform the Nigeria Police Force without commensurate results. The police institution has continued to be plagued by a colonial legacy of coercion, subjugation and exploitation. Government has also set up many presidential panels and committees on police reform, but failed to implement the key recommendations of the various panels and committees. Civil society has also been part of interagency efforts since 2004 to review the colonial Police Act. It was a slow process with little progress until 2020 when the new Police Act was passed and signed into law, repealing the colonial Police Act of 1943.

Reacting to the stark revelations in the report, federal lawmakers expressed concern about the incidents reported and the public officials either named or linked to the documented atroctities. Presentations from federal parliamentarians: Honorable Luke Onofiok, the Chair of the House of Representatives’ Committee on Judiciary and Honorable Henry Nwawuba representing Mbaitoli/Ikeduru Constituency elucidated on the current oversight initiatives undertaken by the country’s legislative body to improve police accountability and foster sustainable reforms in the Nigeria Police Force. Some of the proposed reform measures include repealing the enabling statute establishing the Police Service Commission.

Members of the Action Group on Free Civic Space embarked on the joint fact-finding mission that culminated in this research report during the peak of the #EndSARS protests, with support from the Fund for Global Human Rights. A short presentation by James Savage of the Fund for Global Human Rights harped on the importance of providing emergency support to activists on the frontlines  in critical times like #ENDSARS and COVID-19. As the report demonstrates, the trends noted in Nigeria are resonant in other regions where FGHR supports frontline activists across diverse movements – where states, emboldened and enabled by a rapidly expanding transnational security architecture constructed under the guise of countering terrorism and ensuring national security, are using a ‘security playbook’ of laws, technology and narratives to shrink civic space and silence dissent.

S4C’s Zikora Ibeh’s closing remarks reechoed and validated the research findings. She called on the Nigerian government to build public confidence by ensuring that outcomes of the judicial panels of inquiry on police brutality are made public and their recommendations for redressing the wrongs done to victims are also implemented.