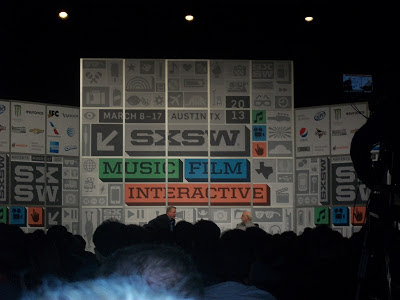 I consider listening to Al Gore – former Vice President of the United States – a big deal. If I didn’t, I wouldn’t queue for over an hour waiting to gain entrance into Exhibition Room 5 of the Austin Convention Center in Austin Texas, USA to hear him speak directly to an audience of not less than 3,000 persons who had come from far and wide to be part of the SXSW Interactive (Digital) Festival. In the one hour no-holds-barred discussion anchored by Walter Mossberg of the Wall Street Journal, Al Gore discussed his latest book,  “The Future”, revealing inconvenient truths about the changing global order in a provocative manner that intensely aroused deep (mixed) feelings.
Particularly captivating is his discussion about the six drivers of global change. In no uncertain terms, Al Gore strongly warned about the consequences of not matching the benefits of technological progress with the preservation of human values. A vivid illustration is how the emergence of new labour technologies involving the growing array of intelligence sensors such as robotics or robo-sourcingis increasingly displacing people from their jobs with spiraling effects on human productivity and job creation. Moving away from the traditional political oratory scented with diplomatic finesse which often skews a narrow focus only on the beneficial dimensions of technological advancements, Al Gore underscored the imperative of control and balance: the missing link in the discourse about emerging technologies!
The dramatic change in the political, economic and military powers in the world is another driver of global change that the United States of America in particular should be concerned about. China has surpassed the United States as the largest economy in the world. Sao Paolo, India, Johannesburg, Japan and many other countries are developing into big cities with astronomical population sizes causing major shifts in the power relationships between nations. Of specific concern to him is the significant weakening of US influence in the world caused by recurrent bad policy choices, unintelligent decision-making and “the hacking of the American democracy’.
How has the American democracy been hacked? The influence of money is a real threat. Al Gore’s elaborate and articulate explanations find expression in the current, extremely disturbing fund-raising trends in the electioneering and democratic processes around the world. Fund-raising is not just affecting the American democracy, but also causing political allegiances to shift towards donors instead of the primary constituencies; the citizens! Perhaps most telling is that fund raising has paved fertile grounds for donors to put puppet strings on lawmakers to drive legislation in a particular direction. America is now burdened with a congress that is “completely incapable of passing any reform, unless the traditional arrangements where people power held sway is restored” It is the same puppet-string ties on lawmakers that are vigorously deployed to ensure that the 99 percent of national income remains in the hands of the top 1% of the population, weighing down social mobility and fuelling social inequality.
The reinvention of life and death is yet another driver of global change deserving of more caution and some strong dose of regulation. With the advancements in cloning, genetic modification and stem cell researches, humans are acquiring the ability to interfere with the fabric of nature. Spider cells can now be merged with that of goats to produce ‘spider goats”. Parents now have the ability to choose certain traits they want to see in their children before they are born. This is where it has become important to draw a distinction between “scary” and “creepy” development. While the miraculous benefits of inventive technological interventions are acknowledged, and even worthy of praise in select circumstances, that does not dispense the need to develop strong regulatory standards that ensure that these developments do not negatively impact on human values.
The media outlet relationship with their primary stakeholders is the most provocative aspect of his speech. He examined the declining effectiveness of media engagement in the United States due in large part to the blurred patterns of information management, propagandist machinations and accuracy deficits in news dissemination. He was full of praises for Aljazeera for having the highest quality news features on climate change, thereby raising the game for news journalism in the United States.
Where exactly did the American media go wrong? Journalism in America is now under the grip of those with the “loudest megaphones” regardless of the accuracy or otherwise of the content they broadcast to the world. 75 percent of Americans believed that Saddam Hussein was responsible for the 9/11 attacks and had amassed weapons of mass destruction which led America to take decisions that have continuing devastating consequences till this day. The American news media outlets ‘with the loud megaphones’ were partly responsible for that grave mistake. Not only that, the media has also played a huge role in the hacking of America’s democracy. A large chunk of funds raised during election campaigns is spent on expensive negative ads that further wreck democratic structures and processes.
So passionately, Al Gore believes and insists that American democracy must be rescued from its hackers, starting with a free-flow of information, not dominated by those with the mega-phones. Internet is the way to go. New voices, new platforms domiciled on the internet are essential to the emergence of a new American democracy.
NOTE: The above article is the personal musing of a Nigerian girl on Al Gore’s speech delivered yesterday afternoon at the Austin Convention Center in Texas, United States.  It particular spurs critical reflections on the Nigerian democratic system where political and media accountability remain a huge challenge.