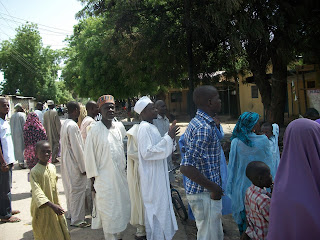 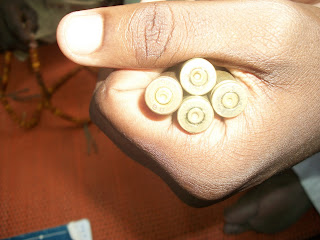 “Security forces have started door-to-door searches for weapons in northeast Borno state after an arms amnesty for Islamist militants expired on October 31”, Colonel Mohammed Hassan, spokesman for the Joint Military Taskforce in Borno said on Wednesday. The measure was part of efforts to curb gun attacks and frequent bombings by the militant group Boko Haram in the state.

“We have commenced house-to-house searches for illegal firearms because, from Tuesday morning, the deadline given to the public to surrender all firearms in their possession expired,” he told journalists in the state’s capital Maiduguri.

One search had already led to the arrest of a suspected bank robber with links to Boko Haram thought to have been behind a heist on a local branch of First Bank in which a policeman was shot dead, he said.
Boko Haram, whose name means “Western education is forbidden”, has been behind dozens of shootings in Nigeria’s northeast this year, usually targeting public and religious figures. Last month, it killed a state television cameraman.

The group is growing in ambition and sophistication. Nigerian and international security agencies believe it has been strengthening ties with al Qaeda’s north African wing.The group claimed responsibility for a deadly bombing on the United Nations’ headquarters in the capital Abuja in August. Security crackdowns have yielded little and in some cases heavy-handedness has alienated the local population.

In a related development, a major disaster was on Wednesday foiled by the police, as the dreaded Islamic sect, Boko Haram, had planned to present cleverly wrapped bombs as Sallah gifts to some individuals in the state.

The state Commissioner of Police, Mr Simeon Midenda, said on Wednesday that the command had arrested a 23-year-old member of the sect, Sheriff Shettima, who was the arrowhead of the plans.  Addressing newsmen, Mr Midenda said that Shettima was arrested in his house in Maiduguri metropolis, where explosives, guns and ammunition, which he confessed were initially prepared to bomb the headquarters of Borno State police command, were recovered.

The suspect, according to the police, revealed that some of the explosives were meant to be wrapped as gifts for people during sallah, adding that “the receivers of the gifts might not suspect that these are IEDs.”