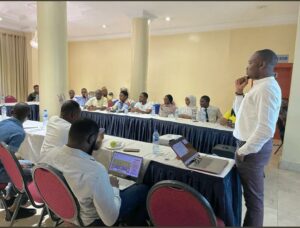 Under the auspices of the Ford Foundation-supported Civic Space Resource Hub (CSR-Hub), Spaces for Change | S4C, in collaboration with Dataphyte | The Interactive, hosted a two-day Digital Security Clinic for media and digital professionals in Nigeria. The Clinic’s 20 participants were drawn from media organizations, bloggers, influencers, freelancers, and thought leaders from states across the country.  Evidence from the Closing Spaces Database indicates that journalists and media practitioners carrying out their professional duties on traditional and online platforms in West Africa are most vulnerable to attacks by state and non-state actors. The more they leverage the advancements in digital technologies to expand the reach of their work, the higher their vulnerability to these targeted attacks. For instance, whistleblowing, though very useful for journalists,  comes with risks such as attacks, ostracization, exposure to litigation, and many more. These risks are exacerbated by the absence of a whistleblowing policy.

In an era of rapidly-backsliding civic freedoms and crackdowns on dissenters either working offline or using digital spaces to demand social justice and accountability, media practitioners and journalists play important roles as gatekeepers pushing back against civic repression. A deep dive into the concept of digital rights and how they are interpreted in different countries across Africa clarified how these concepts affect the work of journalists, media, and digital practitioners. Digital rights transcend internet freedoms, but are particularly interdependent and interrelated with the fundamental human rights to speak, organize and assemble freely. In Africa, digital rights take the form of internet access, internet penetration, and affordability of internet access. Violations of digital rights in Africa come in the form of internet shutdowns, social media restrictions, content moderation, surveillance of citizens, lack of investments in supporting infrastructure for internet access and multiple taxation for tech corporations and mobile communication companies.

Designed to impact participants with the knowledge, tools, and skills to improve their digital security and offline safety, the Clinic’s five courses were designed to reposition target groups to protect themselves individually and collectively, and also take steps to claim and assert their constitutionally guaranteed freedoms of assembly, expression, and association. Tech experts from Dataphyte and independent legal experts from S4C took turns to facilitate training sessions around the Clinic’s five courses: Data Protection, Practising Investigative Journalism Safely, Whistleblowing and Safety Nets for Whistleblowers; Self Care and Social Protection, and Rapid Response Mechanisms.  Participants learned about the rapid response and social protection mechanisms available to them in Nigeria and Africa. They also learned about the ethos and dangers of investigative journalism, the risks and rewards associated with it in a digital age. When a journalist receives a tip from a whistleblower, it is important to build evidence in their reportage and establish facts through investigative journalism. Evidence lends credence to any journalistic piece.

The sessions were highly interactive as participants took part in mock newsroom sessions; group exercises on whistleblowing and evidence-building, and engaged in robust debates on ‘uncomfortable’ topics like LGBTQ, the hijab, dissemination of stories with sexual consent, and terrorism. During the closing session, participants confessed that they never understood the risks associated with their work from a legal and human rights perspective. The practical exercises deepened their knowledge of safeguards to apply when exposed to threats in different situations and circumstances, whether in the office or in the field.  The digital safety clinic is part of the activities lined up under the auspices of the West Africa Civic Space Resource Hub (CSR-Hub) supported by Ford Foundation. The CSR-Hub was established to strengthen the capacity of civic space actors to push back against the shrinking civic space in West Africa.