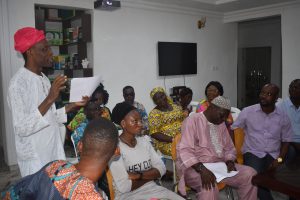 Communities Alliance Against Displacement|CAD—the coalition of informal  and displaced communities in Lagos—is taking the advocacy for the right to the city a notch higher through multi-stakeholder engagements with state agencies and private organizations with aligned goals. Along this line, CAD participated in the consultative workshop organized by the Lagos State Ministry of Physical and Urban Planning (LAMPUP) on the “Preparation of Kosofe Model City Plan” and the Fredrich Ebert Stifung’s Nigeria Just City Strategy Meeting Development held in March and April respectively.

Consistent with the vision of transforming Lagos into a smart city, LAMPUP’s consultative forum aimed to inform and elicit public feedback on the planned remodeling of the Kosofe Area of the state. Over a hundred urban stakeholders ranging from local council development associations, civil society organizations, landlords’ association, market women and traditional rulers attended the forum.  At the forum held on March 24, CAD, represented by the President, Sehinde Ebiesuwa, emphasized the importance of putting people at the center of urban development. City redevelopment proposals, though laudable, must not be accompanied by mass demolitions and forced displacement, he urged.

Experiences from the grassroots and the displaced communities across the state—such as Ilubirin, Badia, Otodogbame, Maroko—reveal a pattern of demolitions targeting mainly slums and informal communities. These demolitions are usually executed on the premise of city redevelopment. Consequently, residents of informal communities now regard the term ‘redevelopment’ as being synonymous with forced displacement.  CAD’s observation elicited an assurance from the Commissioner for Physical Planning and Urban Development that the planned re-modeling will not result in any demolition or displacement.

How can we transform the vision of a Lagos Smart City into a Just City? How can the civil society support and engage platforms for policy making and implementation to ensure they are democratized and participatory? These questions dominated the discussions at the Fredrich Ebert Stifung’s Just City Strategy Meeting held on April 29, which brought together stakeholders, including representatives of civil society organizations, government officials from various ministries such as Lagos State Environmental Protection Agency | LASEPA, Department of Traffic Engineering, Ministry of Transportation, among others. The meeting created an opportunity for participants to jointly explore solutions to the numerous urban challenges associated with the provisioning of Integrated Transport System, clean water and environmental sanitation, access to and safe dispensing of Liquefied Petroleum Gas, inclusive housing and the land policy framework.

Also on Thursday, April 15, 2021, the Communities’ Alliance against Displacements (CAD) convened her monthly general meeting, where representatives of Lagos informal communities and interest groups at the grassroots converged in defense of their housing and land rights. One after the other, communities shared experiences of demolition threats, imminent urban reforms and persisting urban deprivation in their localities entrenching denials of social and economic rights. They brainstormed and sought answers from their legal representatives regarding how to resolve these challenges. CAD executives also seized the opportunity to update member communities on the outcomes of the formal engagements with the state as per the meetings discussed above, and the specific commitments by state authorities to shift away from demolition-centric urban renewal programmes.

The presentation by SPACES FOR CHANGE’s Program Officer, Housing, Urban Governance and Litigation harped on self-initiative and other non-legal strategies for demanding improvements in access to amenities and support services in informal communities. At the end of the general meeting, CAD renewed its commitment to bolster awareness of human rights, particularly the right to adequate housing, among hard to reach and marginalized communities in the state. From greater awareness of rights springs greater participation and engagement with the government and private institutions on the issue of urban inclusion and justice. CAD’s contributions to urban discourse in the state forms part of a broader strategy to deepen community input and participation in the development of policies and programs that affect the social, economic and cultural rights of citizens particularly those living in the informal and slum communities.