END THE REPRISAL ATTACKS ON #ENDSARS PROTESTERS AND WITNESSES! 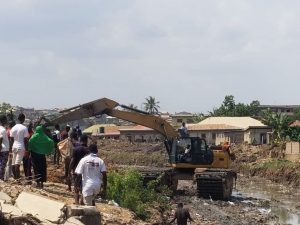 SPACES FOR CHANGE | S4C strongly condemns the demolition of Aboki Estate and Gedegede community——located directly adjacent to the Lekki Toll Gate——whose residents witnessed the October 20 shooting of #ENDSARS protesters by Nigerian soldiers. On the evening of October 20, 2020, Nigerian military forces fired live ammunitions at #ENDSARS protesters campaigning peacefully against police brutality at the Lekki Tollgate. Based on S4C’s tracking and documentation of crackdowns on #ENDSARS protesters, the recent demolitions have earmarks of a reprisal attack on communities for providing eye-witness accounts that countered the official denials and cover-ups for the shooting, injuring and killing of many protesters.

An 8-man Lagos State Judicial Panel of Inquiry and Restitution for Victims of SARS and Related Abuses has been constituted to investigate the shootings, plus other cases of police brutality in the Lagos State. Reports of targeted attacks, including threats, directed at protestors that testified at the panel have been documented, forcing many to either flee the country or to go into hiding. #ENDSARS protesters have been arrested, threatened, prevented from travelling and their bank accounts frozen. All of these point to cruel and vindictive measures targeting witnesses to a crime the state appears desperate to hide and avoid accountability.

Predominantly inhabited by low-wage informal workers and petty traders, who live in shacks and clusters of makeshift homes overlooking the highbrow neighborhoods in the Lekki peninsula, the recent demolitions have rendered hundreds of families homeless and pushed them deeper into poverty at a time COVID-19 is having a crippling effect on the national economy.  Locals came on the land through a license granted by the indigenous land owner, Taiwo Ayoku. For several years, they have lived peacefully in the area, built familial ties and community support networks on which they depend on for their sustenance.

When SPACES FOR CHANGE | S4C visited the community, displaced residents were seen hanging around the ruins of their former homes, trying to salvage what was left of their properties. A Gedegede community leader told S4C that an officer of the Nigerian Police Force, accompanied by officials of the Lagos State Environmental Task Force, visited the community on Tuesday, February 9, ordering them to move out of the area, without stating any timeline. Aboki Estate residents received no visits nor prior warnings. To their chagrin, a team of demolition officials stormed both communities hours later and began to tear down their homes. Residents were largely unaware of the specific agency responsible for the demolitions. Conflicting eye-witness accounts suggest that the demolitions were executed by the National Inland Water Ways Authority or the Lagos State Environmental Tasks Force, or both.

Whereas certain media reports suggest that the community was demolished for blocking the canal that connects the Lagoon, S4C’s decade-long monitoring of housing rights practices in Lagos State reveals a systematic pattern of urban development that adopts the pretext of urban renewal, drainage cleanups, road construction and combating crime to gentrify blighted neighborhoods. From Badia to Maroko, to Ilubirin to Otodogbame to Makoko, too many low-income communities have been pushed away from the city and the dispossessed lands replaced with more affluent districts.

Locals are still in shock, fearing future reprisal attacks. SPACES FOR CHANGE is urging the Lagos State government to immediately halt all forced evictions and demolitions in the area, especially when the Lagos Judicial Panel has not concluded its investigations into the October 20 Lekki shootings. We particularly demand the Lagos State government to pay compensation to owners of properties already destroyed and provide relief in the form of alternative housing and/or fair compensation to all residents evicted at a time health protocols require citizens to stay at home and maintain social distancing. We specifically call on the National Human Rights Commission to investigate the latest demolitions and all other reprisals targeted at ENDSARS protesters.