We Will Pass the PIB in April 2021 – Gbajabiamila 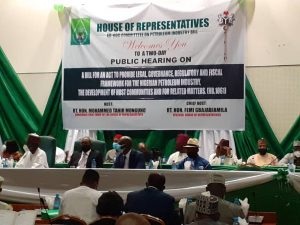 The House of Representatives Ad-hoc Committee on Petroleum Industry Bill (PIB) conducted a two-day public hearing on the proposed executive bill seeking to revamp the entire governance, administrative, regulatory and fiscal architecture in the Nigerian oil and gas industry. The public hearing jumpstarts parliamentary groundworks towards the passage of the bill after several failed attempts. S4C joined a wide spectrum of industry stakeholders to submit legal memoranda detailing proposals for improving participation and legal protection for host communities and entrenching transparency and accountability in industry-wide operations.

The idea behind the public hearing is to have interests that may have not been accommodated prior to the drafting of the Bill to lend their voices and to understand foundational principles undergirding industry reforms. The Bill will also “provide an opportunity for the country to meet the obligations owed to the communities that host the oil and gas exploration and transportation activities and pay a high environmental price as a consequence…There have been various prior attempts to meet this obligation. Let us remember those attempts and be motivated by the knowledge that we can now correct past mistakes and fulfil the responsibilities we owe these communities once and for all,” he concluded.

In their submissions, the various government ministries, department and agencies supported the bill and extolled the various provisions seeking to reform the tax and fiscal regimes. In contrast, oil company representatives led by OPTS chair submitted that the cost of doing business in the Nigerian oil and gas sector is high. The business environment is not competitive and profitable for players in the industry, making it imperative for the PIB to address the gaps in the operating environment. For instance, the Hydrocarbon Tax should be expunged as oil companies are already paying corporate income tax (CIT), education tax and other taxes. The addition of Hydrocarbon Tax will amount to over-taxation, a position that was supported by all the multinational oil and gas companies.

Rivers State Government’s submission challenged the Bill’s fixation on Frontier Basin Exploration. The private sector should be allowed to lead investments in frontier explorations and not the government as was the case in the early stages of oil industry development. Abia State Government wants host communities to be empowered to appoint members of the board of trustees, management committees and advisory committees. The way the current bill is structured does not favour the host communities and will lead to further agitations and hostilities between companies and their hosts. This way, the objectives of the bill espoused in Chapter 3 of the PIB will be defeated.

Chairman of RMAFC contended that the passage of the PIB will not only increase government revenue, but also ensure transparency and efficiency in the industry. However, some gaps in the Bill include the absence of provisions for the monthly inflow of revenue into the federation account. He supports the creation of the Host Community Development Trust Fund, but questioned the source of the Fund. The Fund should be sourced from the already constitutionally-provided 13% Derivation Fund. More importantly, the obligation of oil companies to set up the Board of Trustees (BOT), Secretary of the BOT, Management Committee and Advisory Committee should be transferred to the host communities.

Confusion erupted after a fight broke out between rival factions of the Host Communities of Nigeria Producing Oil and Gas (HOSTCOM). The Chair of the PIB Adhoc Committee, Mohammed Tahir Monguno, had earlier hinted that only a harmonized leadership of the host communities would make representations through one person. This apparently did not go down well with the members of the various factions who struggled among themselves over who should represent and speak on their behalf. As one of the factional leaders of HOSTCOM from Itsekiri stood up to speak, he was opposed by other factional members, leading to the altercation and pandemonium in the hall. This brought the proceedings to a halt. With the abrupt suspension of the proceedings, representatives of oil and gas host communities, civil society organizations and numerous stakeholders lost the opportunity to contribute to the oil reform debates. Amid the rowdy session that ensued, the public hearing came to a close with assurances from the Chair that all memoranda submitted will be given due consideration.