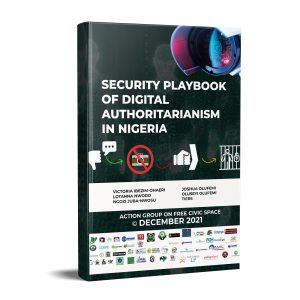 This report presents the findings of a three-part study examining the overapplication or abuse of security infrastructure to crack down on civic actors in Nigeria. Under the auspices of a collective action research undertaken by 12 member-organizations of the Action Group on Free Civic Space (AGFCS), the research documented how the misuse of counterterrorism laws, tools and security rhetoric are potentially becoming the dominant driver of closing civic space in Nigeria. In this first part, the report identifies and documents the new technologies, regulations, laws and tactics employed by state actors and their corporate collaborators to repress the constitutionally-protected freedom of expression, assembly, association, and the right to privacy.

This report builds evidence of a Security Playbook of Digital Authoritarianism by showing how the massive financial resources, equipment and technologies originally procured in the name of counterterrorism and curbing insecurity have been diverted to monitor the movement of citizens, to track activities of civic actors online, intercept private communications, restrict online civic space, and limit the ability of civic actors to organize, associate and assemble freely. The popular tactics include legal restrictions, misuse of surveillance technologies, distributed denial-of-service (DDoS) attacks, Internet protocol (IP) blocking, internet shutdowns, biometrics data collection and social media bans. Others include spying on activists, opposition politicians and coordinated cyber-attacks, especially the hacking of the servers and websites of media and civil society watchdogs.

State actors could not have recorded considerable successes in their restrictive adventures without the cooperation of telecommunication companies (Telcos), internet service providers (ISPs), content moderation platforms, private companies including foreign suppliers of surveillance technologies and local as well as regulators and state agencies. The report provides detailed accounts of the specific companies supplying surveillance technologies to the Nigerian state for repressing fundamental human rights. With the limited checks and balances in place to curtail restrictions on open democracy, internet freedoms, privacy and communication rights, surveillance capitalists and technology suppliers are exploiting the drift towards authoritarianism and the regimes’ lust for unfettered power to make profits. To make matters worse, these restrictions on civic freedoms and privacy rights wear the toga of “national security”, ‘intelligence’ and ‘secrecy’, making it easier for culprits to escape scrutiny and accountability.

A deep dive into the state’s most popular techniques and tactics explains why digital repression, including surveillance abuses in the country is on the rise, and flags the subsequent reforms/steps needed to counter these trends. The report concludes by proffering recommendations to end misuse of digital technologies to stifle dissent, mitigate the effects of illegal surveillance practices, and increase the ability of citizens to freely access information and exercise their legal freedom of expression and right to privacy.

S4C, Dataphyte, TIERS and VSI co-authored the first part, The Security Playbook of Digital Authoritarianism, focusing on the use of technologies, regulations, and other computerized devices to jeopardize the right to privacy, censor free speech and stifle dissent in the online civic space in Nigeria.

Hello and congratulations on the report. Is it possible to check it out on line?