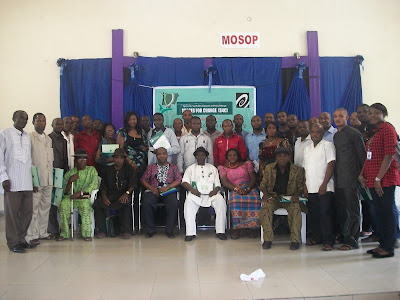 Spaces for Change is pleased to announce the forth-coming conference, HOST COMMUNITIES & THE PIB: OPPORTUNITIES, CHALLENGES AND THE WAY FORWARD. The conference, scheduled to be held in Port Harcourt between March 23-24, 2013, will present an unprecedented opportunity for federal and state policymakers, the media, environmentalists, industry regulators, representatives of civil society organizations and oil producing communities to build sustainable consensus for realizing greater community participation and environmental protection in the Petroleum Industry Bill (PIB). Among other objectives, the conference will campaign for the improved governance of the environment and to strengthen the structure for community participation in the PIB. It also seeks to show that oil sector reforms arrived at through open, transparent and participatory manner is cost-effective and socially, economically and politically advantageous.

Furthermore, the conference will also feature the public presentation of S4C’s latest publication, The PIB RESOURCE HANDBOOK which contains a detailed analysis of the PIB provisions relating to community participation and the environment (CPE). The Handbook forms part of a broader organizational strategy to promote awareness of the PIB, while expanding access to publicly-available data and resources for building the capacity of industry stakeholders and ordinary citizens to monitor and engage meaningfully in the PIB passage architecture.

Nigeria is ranked Africa’s number one and the twelfth globally among oil-producing countries. Despite being among the world’s top oil producers, Nigeria’s oil and gas industry has been plagued by institutionalized corruption, corporate impunity, and grave environmental and humanitarian devastations. At the root of the rot in Nigeria’s oil industry is the absence of a coherent legal and policy framework for holding operators accountable and for addressing serious violations of environmental standards, forcing aggrieved persons and communities to resort to extra-legal and violent confrontations.  Further compounding the situation is the lack of political will to enforce the potpourri of legislations governing the industry operations.
The Niger Delta is home to Nigeria’s mineral oil resources. Despite the region’s wealth of natural resources, the Delta exemplifies the resource curse as it remains one of the poorest and least-developed parts of the country. Local communities suffer from oppressive levels of poverty, infrastructural decay, and environmental degradation, which have in turn precipitated rising ethnic tensions and escalating violence among competing militia groups.
Further aggravating the volatile situation in the region is that the relevant laws regulating the environmental impact of oil exploitation by multinational companies are plagued with both substantive failings and non-enforcement by the relevant authorities. This makes it practically impossible for aggrieved persons and communities to obtain legal or administrative remedies for grave legal and human rights breaches by state and non-state entities. The laxness of regulation and technical capacities mean that regulatory agencies such as the Department of Petroleum Resources and the Federal Ministry of Environment are unable to effectively monitor and ensure compliance with regulatory statutes in the oil industry.
Efforts by the government to overhaul the oil legal regime through the introduction of the Petroleum Industry Bill (PIB) have yet to be matched with the legislative verve required to make the law operational. Absent sustained public engagement, the domestic regulation of oil companies and the protection of oil-bearing communities will likely continue to be weak and inadequate.  Citizen engagement in the PIB passage architecture is also very necessary to open up opportunities to contest policy flaws, challenge bad corporate practices and demand accountability for harmful social and environmental actions.
With this in mind, Spaces for Change (S4C), with support from the Open Society Initiative for West Africa, (OSIWA) is implementing the Oil Sector Legislative Engagement and Accountability Project (OSLEAP) to create spaces for major stakeholders to engage with environment and community participation provisions in the latest draft of the PIB.  Under the auspices of OSLEAP, this two-day conference seeks to mobilize and organize the voices of key stakeholders to monitor and ensure that major demands by oil producing communities and other stakeholders for environmental protection and community participation are adequately addressed in the new PIB.