In 2017, Eke Mgbidi market was demolished, with several shops and goods destroyed, and hundreds of rural traders displaced. Eyewitness accounts allege that a private property developer tacitly conniving with some government officials ordered the demolitions. Corroborating the eyewitness claims, the destroyed shops are being replaced with modern stalls and shopping malls currently under construction by a private property developer. Irked by the resulting livelihood and property losses, the affected traders approached the courts for justice. They instituted legal action in a local court seeking redress for their wrongful displacement and property losses. Having spent considerable time in court awaiting justice to be served, their confidence in the legal process is waning rapidly. Particularly fuelling the surging discontent is the property developer’s continuing construction work on the demolished land in total disregard for a court injunction requiring all parties to stay further action on the disputed property, pending the final determination of lawsuit.

The outreach was timely, coming at a time local traders were losing faith in the justice system. Through the outreach, traders learned about their housing and property rights, how to assert and claim them when breached by either state or private actors. S4C’s legal team comprising Aizighode Obinyan and Kingsley Ogam-Okafor delivered presentations that clarified government’s obligations and citizens’ expectations from an urban and market renewal programs. First off, such programs are an inevitable feature of urban and rural governance, and typically aim to redevelop land and property in a state of disrepair and decline. However, best practice and sound policies are required to strike a healthy balance between urban renewal and the private rights of citizens. The 1999 Constitution of the Federal Republic of Nigeria (as amended 2010) enshrines the right to fair hearing before persons are dispossessed of their right over or interest in property. Therefore, carrying out an urban renewal project without meaningfully engaging relevant stakeholders, particularly persons to be displaced, and affected by the project, would amount to a constitutional violation. Participants further learned that planning authorities and parties must comply with the law, and essentially, adopt best practices and rights-based standards for managing renewal projects to ensure sustainable development.

Apart from constitutional rights protections, participants learned about other local and international legislation that provide legal guarantees for housing and property rights such as the Land Use Act of 1978, the African Charter on Human and Peoples’ Rights (which came into force in 1986), as well as the Nigeria National Housing Policy, among others. For instance, Section 29 (1) of the Land Use Act entitles landholders to compensation for the value of their unexhausted improvements on the land at the time of revocation. Not only that, where the government revokes a right of occupancy for public purposes, the right holder may also be resettled in any other place or area, if appropriate in the circumstances.

During the interactive sessions that followed the presentations, participants lined at the podium to share their experiences during and after the market demolitions. Testimonies revealed that the market was community-owned, having been built on a land that belongs to the community. Since the demolitions, neither the community nor the shop owners have been compensated, resettled, and/or allocated new shops in the ongoing market reconstruction. While the original shop owners have been stripped of their proprietary rights, total strangers are being invited to take up shop allocations in the malls currently under reconstruction. This arrangement starkly contrasts with promises made prior to the demolitions. 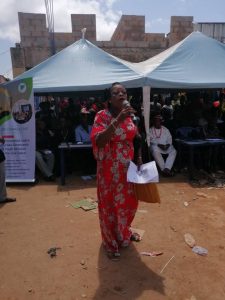 Mr. Dominic Mgbe, Chairman of the Local Government Caretaker Committee had assured affected shop owners that they would be given the right of first refusal upon completion of the new shops. This promise, they say, has not been kept. Asides, the market developer has doubled (and in some case, tripled) the rent for the new shops compared to the pre-demolition rates. All these developments account for the rising tension and acrimony in the market. A pressure group in the community, known as the Mgbidi Peoples Forum, has unsuccessfully intervened by contacting the Local Government Caretaker Committee to halt the project. Due to fear of reprisals or victimization, many citizens do not assert their rights or seek justice for these wrongs.

It was also clear that participants do not have access to the market renewal project plans. Interaction also revealed that they are unaware of, and need to understand the project management process— the bidding process, budgeting, timeline(s), decision-making and responsible agencies, project developer/contractor details, liability for breach of project terms or other regulatory rules, project maintenance plan, etc. S4C team encouraged participants to obtain relevant information about the project from the local and/or state government offices where they can engage their representatives and the relevant authorities, towards heightening their demand for an inclusive market renewal project.

At this point, S4C’s legal team harped on the role of the courts of law to uphold citizens’ rights against all entities, including powerful private and state actors. In addition to the courts, S4C enlightened them about other administrative mechanisms for pursing legal remedy for the demolitions. For instance, a recent press release issued by the Attorney General of Imo State invited all judgment creditors and garnishee order beneficiaries (whether nisi or absolute) to report to the Attorney General’s chambers with the certified true copies of such judgments and orders. This opens a new vista of opportunity for securing justice.

The outreach ended with the traders soliciting S4C’s legal support in their quest for justice. While eagerly looking forward to S4C’s technical and legal support, the traders went home fully empowered to assert their property rights within the context of the market renewal programs.