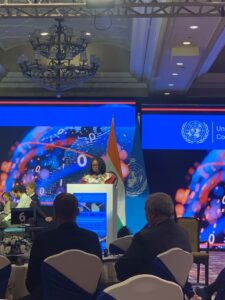 Spaces for Change | S4C attended the Special Meeting of the United Nations Security Council Counter-Terrorism Committee on “Countering the use of new and emerging technologies for terrorist purposes”, held in Mumbai and New Delhi, India, between October 28-30, 2022. This meeting was the climax of a series of high-level technical sessions regarding the increasing threats posed by the misuse of new and emerging technologies for terrorism purposes while recognizing the many positive uses of technologies for countering terrorism. Governments are concerned about the increasing ability of terrorists to move or store funds through the use of “digital marketplaces and wallets, online payment platforms and applications, mobile payments or virtual currencies”. There are also concerns about the increased risk of raising funds for terrorist activities using “crowdfunding, merchandise sales, donation appeals through social media platforms, and other methods.”

Along these lines, the Special Meeting specifically focused on three significant areas: (i) the use of the Internet and social media; (ii) terrorism financing; and (iii) unmanned aerial systems (UAS). The meeting brought together representatives of governments, tech corporations, United Nations organizations, international and regional organizations, civil society organizations (CSOs), private-sector entities, and members of the Global Research Network (GRN) of the Counter-Terrorism Committee Executive Directorate (CTED) to deliberate on the exploitation of new and emerging technologies by terrorists.  Consistent with the above, the meetings’ objectives were three-fold:

S4C’s Communication Officer, Ms. Sefa Ikpa, was one of the panelists during the session on “Overarching considerations for countering the use of new and emerging technologies for terrorist purposes.” Drawing extensively from the findings of the organization’s recent research on the enablers and drivers of digital authoritarianism, her address advocated for the mainstreaming of international human rights standards in the solutions proposed against threats from new and emerging technologies. S4C’s research unearthed how governments misuse the counterterrorism (CT) architecture resulting in the overflow of intended and unintended consequences such as stifling constitutionally-protected freedoms of expression, association, and assembly. Misuse often takes the form of increased policing powers,  expanded budgetary allocations for surveillance infrastructure, the enactment of restrictive legislative measures that curtain internet freedoms, free speech, and imposing harsh sanctions on internet users and the broadcast media.  Consequently, countries have experienced criminalization of free speech, internet shutdowns, Twitter bans, Facebook suspensions, and the enactment of numerous cybercrime laws. While acknowledging that terrorism threats faced by countries around the world are enormous,  the United Nations must take steps to ensure that human rights are not easily abused by governments in the name of curbing terrorism.

S4C attended this event under the auspices of the Civil Society Coalition on Human Rights and Counter-Terrorism.  The presentations from other members of the coalition reechoed these sentiments, particularly challenging the lack of definitional certainty of terrorism in national CT policies. They also shared a wide range of recommendations for improving due diligence, deepening legal protection for human rights, and protecting data privacy, especially on content moderation platforms.

The two-day Special Meeting climaxed with the Committee’s adoption of the Delhi Declaration committing Member States to prevent and combat digital forms of terror, notably using drones, social media, and online terrorist financing. Among other things, the Declaration promises to “ensure that any measures taken to counter terrorism, including the use of new and emerging technologies for terrorist purposes, respect the Charter of the United Nations and comply with their obligations under international law, including international human rights law, international humanitarian law and international refugee law, as applicable.” This commitment expressed in the Declaration is forward-looking and represents an important first step towards ensuring that human rights are not sacrificed at the altar of counterterrorism.