Stakeholders Converge to Take a Harder Look at CAMA 2020 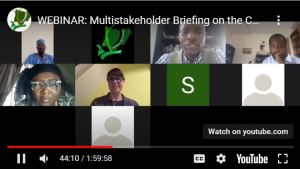 A stakeholder briefing SPACES FOR CHANGE | S4C co-hosted with the European Center for Non-profit Law (ECNL) on September 9 examined how the Companies and Allied Matters Act (CAMA 2020) recently passed into law is contributing to the dynamics of civic space in Nigeria. Whilst certain provisions of the new law support the government’s efforts to strengthen the framework for corporate regulation and curb illicit financial flows, some other provisions grant the government excessive regulatory powers over non-profit entities and hold enormous potential to make them operate under restrictive conditions.  This briefing represents the first of many steps by civil society groups towards addressing the conflicting dynamics arising from the contentious provisions of the new law and also balance perspectives in the face of growing dissension.

An impressive line up of speakers and experts addressed various issues beginning with the comparative analysis of the old CAMA 1990 vis-à-vis the new CAMA 2020. Ms. Victoria Ibezim-Ohaeri of SPACES FOR CHANGE discussed how the grant of excessive discretionary power to the regulatory body (Corporate Affairs Commission) increases susceptibility to constitutional infringements particularly the freedom of association. Not only that, the statutory fixation on the removal of trustees and taking over the assets of associations like their bank accounts and landed properties does little to control illicit financial flows. She concluded by debunking the myths around whether the new CAMA 2020 reflects similar sentiments expressed in UK charity laws, the suitability of the new law to the humanitarian sector and the drivers of persistent restrictive legislations targeted at non-profit entities in Nigeria.

ECNL’s Vanja Skoric discussed the implications of the new legal provisions on the civic space using the prism of international human rights law. Article 22 of International Covenant of Civil and Political Rights (ICCPR) guarantees the right to freedom of association which applies for the entire life of the association, including the registration, internal governance, management and finances of association. Any action taken against the management or governing and financial independence of the association constitutes a type of restriction on freedom of association. ICCPR also recognizes that freedom of association can be restricted in certain narrowly defined conditions which include: they must (a) have a formal legal basis; b) serve a legitimate aim and (c) are necessary in a democratic society to achieve those aims– i.e. there must be a pressing need for interference and the measures must be proportionate to the aim.

Under Article 56 of African Commission on Human and Peoples’ Rights (ACHPR) Guidelines on the Rights to Freedom of Peaceful Assembly and Association, sanctions shall be applied only in narrow and lawfully prescribed circumstances. Also, they shall be strictly proportionate to the gravity of the misconduct in question and shall only be applied by an impartial, independent and regularly constituted court, following a full trial and appeal process. Enlarging governmental powers to suspend the trustees of an association and appoint an interim manager or managers to manage the affairs of an association, restrict the freedom of association because they infringe on the ability of association to freely determine their self-governing and management structures and bodies. Such provisions do not fully comply with standards of fulfilling the legitimate aim nor standards of proportionality and necessity.

Dr. Sam Amadi  agrees that the latest legal revisions in CAMA empowering individuals and groups to easily incorporate businesses promotes the ease of doing business and can potentially attract investors. Examining the constitutional dimensions of corporate regulation, he posits that the government is obligated to intervene in a situation of potential harm to society to protect the public interest. S.45 of 1999 Constitution contains derogation provisions empowering the state to limit certain civic freedoms in some situations to protect the public interest, national security, defence, public health and morality among others. However, there is nothing in S.45 that avails the state the power to infringe association rights. So, what is the overriding public interest in invading voluntary associations and removing their trustees?  he asked. In the absence of a compelling overriding public interest, section 839 of CAMA creates a slippery slope that could lead to violation of human rights of citizens. In particular, the freedom of association as well as religious freedoms guaranteed under section 40 of the Nigerian Constitution are potentially threatened where the state is vested with enormous powers to remove non-profit leaders and replace them with another person unknown to the association.

While Bishop Olufemi Ore of the Pentecostal Fellowship of Nigeria believes that the new CAMA will have a devastating effect on the operational architecture of religious institutions, Dr. Abubakar thinks differently, and argues that the law does not target any specific sector. Reverend Father George Ehusani approached the subject from the context of the thinning atmosphere of trust for the government’s regulatory intentions. Based on the past antecedents of regulatory bodies where executive powers have often been abused and used to stifle dissent, there is increased perception that this law will be no different. One major consequence of the historical misuse of regulatory codes is the growing public distrust for even the government’s finest intentions.  That distrust lies at the core of the public censure towards the amendment of the CAMA law and the associated presidential assent in August of 2020.

These presentations sparked debates among stakeholders on various issues raised by the panelists. In particular, the discussion regarding how international financial regulations like the Financial Action Taskforce (FATF) are fueling a wave of restrictive regulations at the national level, prompted debates between GIABA officials and representatives of the Global NPO Coalition on FATF. There was also a discussion on regulatory uncertainties caused by the duplicity of regulations and overlapping institutional powers.

The briefing moderated by Ford Foundation’s Dabesaki Ikemenjima concluded with salient strategies on the way forward among which include to approach the National Assembly to amend the repressive sections, to get the president of Nigeria to revoke assent of the law or send it back to the National Assembly to address the key concerns of stakeholders and to mobilize civil society groups to challenge the controversial sections of the law in court.