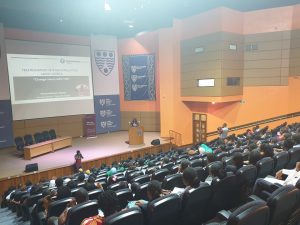 At the Technovation Regional Pitch held in Lagos, Nigeria, hundreds of tech-savvy young girls aged, 8-18 years, showcased their abilities to code hi-tech solutions to urban challenges faced in the city of Lagos. Technovation is a program set up in Silicon Valley by Iridescent, a global non-profit organization, which offers girls between ages 10 – 18 the platform to learn skills they require to emerge as tech entrepreneurs and leaders. Every year, Technovation challenges girls all over the world to build a mobile app that will address a community problem. Since 2009, over 2000 girls have participated in Technovation from Nigeria.

Delivering the keynote—titled, ‘Change Begins With ME’—SPACES FOR CHANGE’s Executive Director, Victoria Ibezim-Ohaeri, illustrated how technology has significantly transformed the landscape for governance, information, energy, transportation, employment, private and public infrastructure, and the way we live. The innovative potential of young people, combined with the power of technology, made these transformations possible. For instance, Mark Zuckerberg formed Facebook from his dormitory room on February 4, 2004, with college roommates. Kylie Jenner’s cosmetic sales success comes from a mixture of promotion on her personal channel as well as her dedicated business channel on social media, mainly using Snapchat and Instagram. Bobby Murphy co-founded social media app Snapchat, which debuted on the New York Stock Exchange in March 2017.  Drew Houston is the co-founder and CEO of Drop-box, a cloud storage firm he built with MIT classmate Arash Ferdowsi. The list is long.

Mark Zuckerberg, Gbenga Agboola, Bobby Murphy, Kylie Jenner, Drew Houston and Arash Ferdowsi, add to the list of young people across the world that have used the power of technology to transform not just their lives, but the world as a whole. The stories of these young men and women demonstrate how youth actively solve society’s numerous problems by contributing to the creation of new jobs, the economic empowerment of vulnerable groups, the promotion of better health systems, and access to information and quality education.

All the contestants in the junior and senior categories developed mobile app solutions to problems faced in urban and rural areas, such as waste management, insecurity, internal displacement, sexual assault, humanitarian assistance, transportation, access to education and healthcare, e-commerce and so forth. However, most of the apps aimed at solving the numerous problems that young people face in Lagos. Along this line, the apps rendered ideas for improving access to education, escaping from incidents of crime and violence, simplifying transportation systems, rendering assistance to internally-displaced persons and raising funds for girl-child education.

Ms. Ohaeri encouraged the participants, numbering over 100 young girls, to start small, build networks, stay focused, acquire experiences, expand relationships, carve a niche and aim for steady deals. They were charged to join the millions of young people who are helping to bring about change in the world, by taking up with passion and commitment, the challenge of promoting the wellbeing of the most vulnerable people and communities.

The event was held on Saturday, May 25, 2019 at the Lagos Business School. The young girls went home, elated and energised to join the next generation of female tech-entrepreneurs in Nigeria equipped to play huge roles in bringing about the world we want by 2030 – a world of peace, prosperity and inclusion, leaving no one behind.