‘YOUR HOUSING, YOUR RIGHT’ Radio Program Continues on KISS FM 98.9 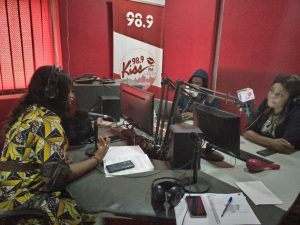 SPACES FOR CHANGE| S4C’ Executive Director, Ms. Victoria Ibezim-Ohaeri, was live on the Kiss FM 98.9 radio talk-show, The Podium, to discuss ‘Rights to the City for the Urban Displaced’ on June 12, 2019. The media talk was the third of S4C’s four-session sensitization series on housing and urban governance in Nigeria. The series is aimed at promoting the constitutional right of every person to have access to a safe, suitable and affordable housing, by advocating for a clear and dignifying procedure to guide the conduct of displacements.

The program aired for 30-minutes educated listeners across Lagos and Ogun State about the causes of displacement, the circumstances where state officials are authorized to demolish property, and the statutory safeguards against displacement. It also discussed the rights of displaced persons and groups — especially those displaced outside the confines of the law — and placed emphasis on the common issue of inadequacy of compensation for compulsorily acquired land.

The Constitution of the Federal Republic of Nigeria, 1999 as amended in 2010, grants citizens the right to challenge the amount of compensation received for property acquisition. However, this is subverted when State Governors commonly rely on the provisions of the 1978 Land Use Act to compensate only for the unexhausted improvements on the land, which includes the land (annual rent paid for the year of acquisition), buildings (replacement cost), and crops (amount equal to the value). There is need to reform the Act to enhance the majority’s access to land and affordable housing, especially for the poor and vulnerable segments of the Nigerian population.

On the management of emergencies such as the recent Ita-Faji building collapse, S4C had issued a press statement commending the Lagos State government for its effective handling of the situation, particularly the resettlement of displaced persons. The humanitarian assistance to the displaced victims of the collapse was the first of its’ kind and a good precedent for the State.

Regarding the issue of proliferation of slum settlements in Lagos, Ms. Ohaeri advocated for the Lagos State government to consider other types of land holdings, other than the statutory right of occupancy, to enable the majority of state residents without formal land titles to have access to land registration. Doing this would eventually boost state revenue. This proposal is being done in Tanzania and South Africa, where landholders in urban slums are given land titles that are a hybrid of tenancy and certificate of occupancy. This gives them security of tenure and a basis to invest in regeneration of their building and environment.

Where there is need for regeneration, the Lagos State Urban and Regional Planning Development Law (LSURPDL) in Section 55 states that the Lagos State Urban Renewal Agency (LASURA) can grant, guarantee or facilitate the grant of loans for housing renovations to a person/s in line with area improvement plans; or even conduct such improvements directly with expense recovery allowable against the property owners. Whether or not citizens have land titles or not, they have the right to the city to the same extent as all other urban dwellers. States bear an obligation to put in place services, resources and a conducive environment to enable such citizens achieve self-reliance.

Listeners were further enlightened on the ways to monitor and establish that lands acquired from them by the government are eventually used for the stated purpose and in the public interest.  In the same vein, State authorities were charged to adequately compensate or resettle persons before any demolition. The practice of demolishing homes first, and then attempting to repair the resulting human dislocations later, need to stop.